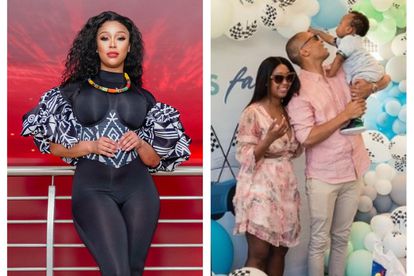 A Father’s Day post by Minnie Dlamini went down in flames after she seemingly snubbed her baby daddy and ex; Quinton Jones

Sharing a collection of pics, which included her own father, her grandfather, her father-in-law, and her older brother, Minnie Dlamini praised the men for being great dads.

She captioned the post: “It’s one thing to be blessed with the best dad I could ever ask for, it’s another thing entirely, to have that example from my grandfathers all the way to my older brother”.

She added: “Happy Father’s Day to all the fathers who step up and commit to raising their children. We are because of you”.

But followers quickly spotted the glaring absence of her estranged husband Quinton Jones, who is father to their son Netha. The pair announced their marriage split in February after less than five years of marriage

Ouriellegrace: “Where is your husband in all of this?”

ALSO READ: ‘Do not divorce’: Minnie Dlamini jokes about being single amid cold front

It wasn’t just Minnie Dlamini who forgot to mention their exes in a Father’s Day post.

Shauwn Mkhize also notably left her ex-husband Sbu Mpisane off a long list of significant father figures in her life.

“You forget Sbu Mpisane”, one follower posted in the comments section.

However, Shauwn did post a picture of son Andile Mpisane, who has three children with two different women.

Tagging Andile, she shared: “You are such an amazing dad, it often feels like you were made for this role. You show so much care, consideration, and gentleness to your little ones, your smile lights up their faces. It’s been a highlight watching you mould into the father and man you are”.