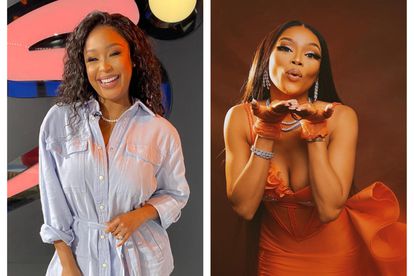 They’ve been long pitted as industry rivals, and have even claimed to be “100% not friends”. But a new era is dawning for Minnie Dlamini and Bonang Matheba who surprised their fans by showing each other love on social media.

On Tuesday 7 June, Minnie Dlamini praised her LIVE Amp co-host. The duo then exchanged kind words with each other.

SHOWING LOVE ON THE GRAM

On Tuesday 7 June, Minnie Dlamini reflected on her 12-year journey in the entertainment industry – where her roots began in music show LIVE Amp.

Posting a clip of the show in 2010, in which she was announced the winner of a presenter search, Minnie showed appreciation for her early start.

But it was her comments about Bonang in particular that had fans intrigued. Tagging Bonang and co-presenter Sizwe Dhlomo, she wrote on Instagram: “@bonang_m @sizwedhlomo were consummate professionals and I knew that I needed to work extra hard to be worthy of being on that LIVE stage with them”.

To fans’ surprise, Bonang left a comment under the post. She wrote: “The best memories…. EVER! What an unforgettable journey. Thank YOU”. Bonang added a love heart and happy face emoji to her comment.

And even more surprisingly, Minnie returned the love. She replied to Bonang: “Thank you for always keeping me on my toes. Bless you, queen”.

MINNIE DLAMINI AND BONANG’S BEEF THROUGH THE YEARS

Whilst sharing sweet words between celebs is nothing out of the ordinary, it is definitely a first for Minnie and Bonang.

In 2015, Minnie infamously told Grazia magazine of her true feelings toward Bonang.

She said: “I want people to know that I don’t like talking about other personalities in the industry. That being said, Bonang and I are one hundred percent, not friends. However, we’re not enemies either and I respect her as a colleague,” she told the magazine.

In 2017, Bonang took a swipe at Minnie after being accused of “stealing her shine” by holding her 30th birthday party on the former’s traditional wedding to now estranged husband Quinton Jones.

She told TshisaLive: “I have been in the industry for 13 years. It is water off a duck’s back. I am not worried about what people say. They will always talk about me because of who I am. As one of the biggest personalities in the country, if I throw a party, people care”.

Later in that year, Minnie threw shade back by stating “I don’t even follow her,” when asked if she “Instagram stalks” Bonang.

ALSO READ: ‘Proud of him’: Slik Talk praises Quinton Jones for ‘moving on’ from Minnie