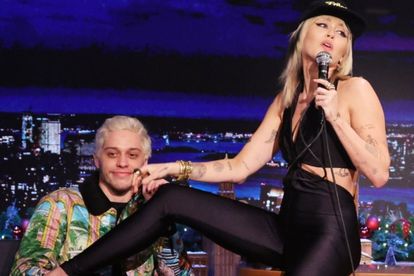 When it comes to Pete Davidson, it looks like Kim Kardashian may have some competition to deal with. If rumours are to be believed than Miley Cyrus has also set her sights on her man too!

The singer fueled rumours last week after she appeared with Pete on the Tonight Show with Jimmy Fallon.

Miley flirted up a storm with the Saturday Night Live comedian. She also outrightly confessed of Kim and Pete’s romance: “It should have been me”.

MILEY CYRUS: IT SHOULD HAVE BEEN ME

Miley Cyrus sent tongues wagging when she performed a sultry rendition of Yvonne Fair’s It Should Have Been Me, to Pete Davidson

The song is about a woman watching her love marry someone else.

Miley cheekily added: “Pete Davidson, this song is for you. When I saw those photos, this is what I played.”

But Miley changed up the lyrics referencing the hot new couple’s romance and public outings.

She sang: “It should have been me. In that Lamborghini leaving that nice a** restaurant! I want to watch a movie in frickin’ Staten Island”.

Miley and Pete will be hosting the NBC New Year’s Eve special together. And the singer used the opportunity to once again take a jab at Kim Kardashian.

She captioned an image of the pair: “Pete & I are official! CO-HOSTS that is! Watch @fallontonight . Our first show together as a pair! We’ll be talking about #MileysNewYearsEveParty hosted by US in Miami!”.

WHAT MAKES PETE DAVIDSON SO ATTRACTIVE?

Meanwhile people are sharing their thoughts on why they believe Pete Davidson is considered attractive.

The 27-year-old has dated a slew of beauties including Ariana Grande. Kate Beckinsale and Kaia Gerber to name a few.

Now a Reddit thread is discussing what qualities the star possesses. And comments ranged from totally sweet to completely hilarious!

“He seems very genuine and he’s confident in his vulnerability. I get the feeling he is very focused and attentive with his partners”

“Dude’s a total sweetheart with a great sense of humour. And he has a great relationship with his mom!”

“He has nice lips, a good smile. I like his tattoos. He reminds me of the funny misfit dudes I was into in high school”