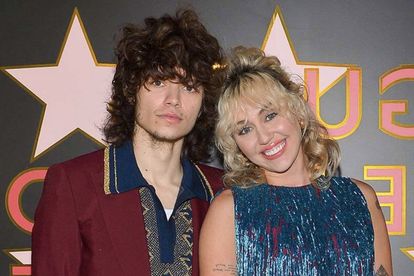 Miley Cyrus was spotted getting close with her rumoured boyfriend, Maxx Morando at her New Year’s Eve party special. Image via Twitter @ValidNewsToday

Miley Cyrus was spotted getting close with her rumoured boyfriend, Maxx Morando at her New Year’s Eve party special. Image via Twitter @ValidNewsToday

The 29-year-old singer is seen in video footage circulating on Twitter singing and dancing with the Liily drummer backstage during her breaks from co-hosting her Miley’s New Year’s Eve Party‘ NBC special with Pete Davidson, further fuelling speculation the pair are together.

MILEY CYRUS’ NEW SONG COULD BE ABOUT MAXX MORANDO

The Midnight Sky hitmaker was first spotted with the 23-year-old musician in November when they attended Gucci’s ‘Love Parade’ fashion show in Los Angeles.

During her end-of-year special, Cyrus treated fans to a new song called You, which fans have speculated could be about Morando.

It features the lyrics:

“I got some baggage / Let’s do some damage / I am not made for no horsey and carriage / You know I’m savage / You’re looking past it / I want that late-night sweet magic / That forever lasting love / But only if it’s with you.”

A WARDROBE MALFUNCTION FOR MILEY CYRUS

The Wrecking Ball hitmaker also caused a stir early in the evening when her top broke as she performed Party in the U.S.A. She briefly left the stage, returning in a red blazer she’d sported earlier in the programme.

As she sang, she emphasised the lyric:

“Everybody’s definitely looking at me now.”

“I’m still in the most clothes that I’ve ever worn on stage,” she added jokingly.

MILEY CYRUS USED TO THINK SHE ‘WOULD DIE’ WITHOUT A PARTNER

Miley Cyrus – who split from ex-husband Liam Hemsworth in August 2019, after just eight months of marriage, before briefly dating Kaitlyn Carter and Cody Simpson – recently admitted she used to think she “would die” without a partner, before realising her life had a different purpose.

“I had a theory I would die if I didn’t have a partner. If I didn’t have someone to kiss me every single night. But then this was my purpose, but this was taken from me during COVID, so then I found a new purpose and that’s music is the glue over the last two years and it was what was keeping us strong at the time,” she said.

“I’m just so fortunate to be a musician.”

ALSO READ: Nicolas Cage is set to be a dad for the third time