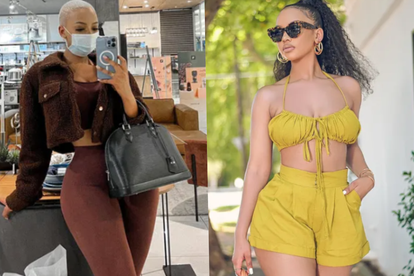 Mihlali Ndamase has asked trolls to leave her family out of her public scandals. Images via Instagram: @mihlali_n

Mihlali Ndamase has asked trolls to leave her family out of her public scandals. Images via Instagram: @mihlali_n

Mihlali Ndamase has been the recipient of a lot of negative attention as of late. The influencer and content creator has been accused of dating married men and being a homewrecker after rumours started circulating that she is seeing SA businessman Leeroy Sidambe.

While she has maintained her silence on the matter, she has now come out to ask people to leave her family – and mother in particular – out of the matter.

It has been quite the week in South Africa’s celebville this weekend as many local stars were accused of all sorts of things.

The person behind most of the accusations is entertainment blogger Musa Khawula who often takes to Twitter to share harrowing claims about the country’s most affluent people.

One of those claims is that Mihlali Ndamase is dating businessman Leeroy Sidambe who is currently married to Jane Sidambe.

A short while after making the claim, a photo of Mihlali and Leeroy was shared online leading many to believe the rumours are true.

It appears the scandal has resulted in social media users trolling the 25-year-old’s mother and she is not happy with it.

Keep the family out of it

Taking to her Instagram Stories, Mihlali asked that people stop sending “foul messages” to her mother.

She also said that she is aware of the speculations about her private life but will never address them.

The influencer then went on to ask that the public not involve her family in anything that pertains to her whether positive or negative because they are choosing to live a private life away from public scrutiny.

“Please respect my family’s decision to live a private life and leave them out of anything positive or negative said about me,” reads part of her statement.