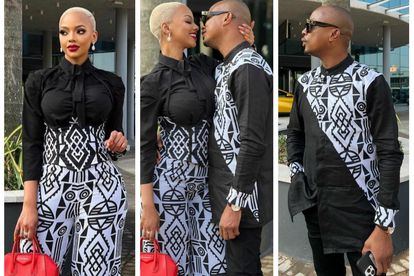 After months of speculation, Mihlali Ndamase has confirmed rumours she is dating married businessman Leeroy Sidambe.

The couple – who up until now has kept a low profile – have gone Instagram official.

Taking to his IG Stories on Saturday evening, the wealthy businessman – who is friends with the likes of Somizi and Shauwn “MaMkhize” – posted a picture of him embracing his girlfriend Mihlali.

“Served”, he captioned the pic.

And to everyone’s surprise, Mihlali shared the pic on her own IG Stories

The grand reveal comes days after reports that Leeroy’s estranged wife Mary-Jane was unfaithful to him during their marriage. According to celeb bloggers The Popcorn Room, Mary-Jane was allegedly caught cheating before Leeroy started dating the influencer.

News of Mihlali and Leeroy making it official on the gram soon became a trending topic on Twitter.

But whilst many tweeps were happy that the beauty blogger had found love, others were disappointed at her decision to date a married man.

@nono_tee_: “May it end in tears of pain. I don’t care if y’all say I’m bitter, she was the cause of someone’s tears”

@Khumo_Badbadu: “I don’t see Mihlali marrying this man. Sis is there for a good time not a long time. Also, this is low-key an L. I mean personally, I wouldn’t take any relationship he’s in seriously. If he can do this to the mother of his kids, he can most definitely do it to her.

@Afrikanwolf: “Mihlali is in the Bundesliga of home wrecking, wearing matching outfits with someone’s husband is just wild

Mihlali is a homewrecker pic.twitter.com/Ncb75JJRrX