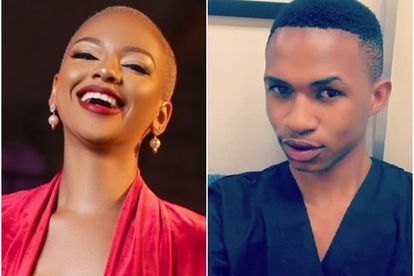 Mihlali Ndamase and Musa Khawula shocked tweeps with a messy exchange on Twitter on Thursday.
Image via Twitter
@mihlalii_n
@musakhawula

Mihlali Ndamase and Musa Khawula shocked tweeps with a messy exchange on Twitter on Thursday.
Image via Twitter
@mihlalii_n
@musakhawula

It’s been a day of savage clap backs from Mihlali Ndamase after she responded to rumours on social media about her private life.

The influencer and beauty blogger took aim at fans who had been sending foul messages to her family in an Instagram Story on Thursday afternoon.

But she wasn’t done yet…

Whilst controversial celebrity blogger Musa Khawula is known for his wild accusations against Mzansi’s biggest stars, his latest attack on Mihlali seemed a little too personal

He tweeted from his official account: “Not ya’ll being left to use the Malakyt app that nobody asked for, for baby girl to fly to Bots for her nails. Jokes write themselves”.

Musa’s comment relates to an earlier tweet by Mihlali in which she asked her Twitter followers if she was being “extra” by flying her nail technician in from Botswana.

Another tweep added: “Are you guys fronting with these so-called companies yall have? Couldn’t you log into your app and find an SA-based nail technician?”

But Mihlali was unfazed, and defended her actions by replying: “They aren’t as good, I’m so tired of being disappointed by my sisters”.

SHOCK AS ‘MURDER CHARGES’ ARE BROUGHT UP

And unlike Musa’s previous tweets about her, Mihlali was not about to let this one go.

She savagely clapped back at the mysterious blogger: “You have a whole murder case to worry about, I don’t think me having the luxury of flying a nail technician in and out of the country should be your concern, my baby”.

Mihlali was referring to unsubstantiated claims on social media about Musa allegedly being linked to a friend’s murder.

But just as tweeps were still digesting the bombshell information, Musa clapped back at Mihlali.

He tweeted: “Babes whoring your a** with everybody is a confirmed fact. An accusation remains to be confirmed and that’s it.

“Whoring your a** to Forbes 30 Under 30 is what everybody knows. Run your silly YouTube channel at the expense of taxpayers. Good luck”