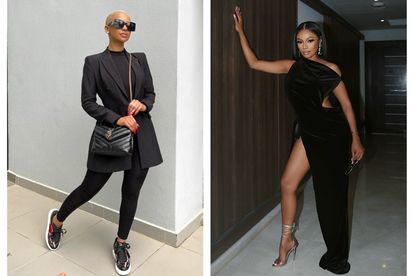 Mihlali Ndamase has defended her use of a meme of friend Bonang Matheba.
Image via Twitter
@mihlalii_n
@bonang

Mihlali Ndamase has defended her use of a meme of friend Bonang Matheba.
Image via Twitter
@mihlalii_n
@bonang

Mihlali Ndamase has reacted to allegations she purposely posted an unflattering picture of industry peer Bonang Matheba on her social media account.

The celebrity influencer came under fire after tweeps called her out for trying to “sabotage” the media personality. But the beauty blogger has hinted that she has been unfairly targeted by critics.

On Monday 6 June, Mihlali posted a “meme” of Bonang on her Instagram Stories.

But what followed was a social media storm in which she was accused of “doing Bonang dirty”. Mihlali was also called a “fake friend” by YouTuber Slik Talk in a scathing video.

Mihlali – who was previously accused of dating married man Leeroy Sidambe – reacted to the news on her Twitter account.

Responding to a tweep who defended her, the Malakyt founder added: “I’m so tired shame, I even post memes of MYSELF but because it’s me there must be more to it”.

It’s not the first time Mihlali has clapped back at rumours. The social media star previously put controversial celebrity blogger Musa Khawula on blast by accusing him of murder.

WHAT DOES BONANG SAY?

Whilst Bonang has yet to directly respond to rumours about Mihlali’s meme drama, she has liked tweets from followers who’ve encouraged her to “stay classy”.

And whilst Mihlali and Bonang reportedly run in the same circles, tweeps claim this could signal a turning point in their friendship.

One tweep posted: “I don’t think Bonang and Mihlali will click as they did before. After that stunt she did of posting her, Bonang hates being embarrassed to the public”.