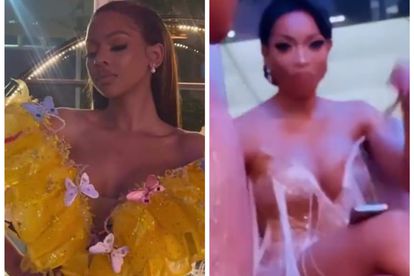 Mihlali and Leeroy Sidambe’s wifeMary-Jane reportedly crossed paths at the Durban July over the weekend.
Image via Twitter
@musakhawula

Mihlali and Leeroy Sidambe’s wifeMary-Jane reportedly crossed paths at the Durban July over the weekend.
Image via Twitter
@musakhawula

With celebs culminating at the Durban July over the weekend, there was bound to be a number of awkward encounters. And according to videos posted on Twitter, Mihlali Ndamaseand the estranged wife of her boyfriend Leeroy Sidambe were one of them.

The influencer has been linked to the businessman, who is married to Mary-Jane Sidambe.

In clips circulating on Twitter, Mihlali and her rumoured married bae made an appearance at the Durban July together.

Mihlali was pictured wearing a custom honeycomb-inspired ensemble by Keys Fashion, whilst Leeroy Sidambe wore a matching neckerchief and pocket square. The duo was spotted sipping on chilled champagne in a VIP section of a Durban July marquee.

Meanwhile, Mary-Jane Sidambe was spotted with a group of girlfriends also in the VIP section of a marquee.

Mary-Jane and her friends – which included Nokukhanya Zulu also partied the night away at a nightspot.

SOMIZI AND MOHALE MEET FOR THE FIRST TIME

It wasn’t just Mihlali who had an awkward encounter at the Durban July – Somizi and his estranged husband Mohale Motaung also had a run-in.

According to The Sowetan, the exes reunited in the Afrotainment marquee, where Somizi was co-hosting.

The publication reported: “Mhlongo had just introduced amapiano sensation Pabi Cooper when Motaung, accompanied by besties Lasizwe Dambuza and Norma Mngoma, entered the VVIP section. As would be expected, tongues were wagging and you could cut the tension with a knife”.

Meanwhile, Mohale did his best to make his ex Somizi jealous after posting a picture cuddling the presenter’s ex-friend Lasizwe.

ALSO READ: ‘Suggesting he would kill Mihlali is vile’: Tweeps on Nota’s comment