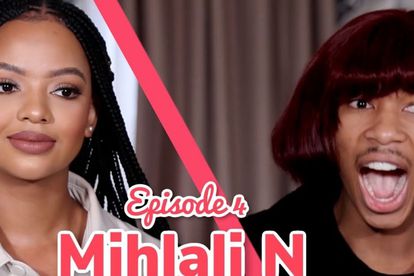 Mihlali is confronted by Lasizwe over a rumour which went viral in his YouTube show: ‘Drink or Tell The Truth’.
Image via YouTube

Mihlali is confronted by Lasizwe over a rumour which went viral in his YouTube show: ‘Drink or Tell The Truth’.
Image via YouTube

The social media influencer and beauty blogger appeared as a guest on Lasizwe’s YouTube show, Drink or Tell the Truth.

And there was lots of tea to spill…

MIHLALI: DID SHE OR DIDN’T SHE?

In a preview clip from the show posted on social media, Lasiwe puts Mihlali in the hot seat when he addresses a burning topic which made headlines and trended online.

He can be seen asking the squirming star: “There’s this hun on Twitter, her name starts with a ‘M’.

“This hun on Twitter went out and said you stole her man. My question to you. Did you shaya this….” Lasiwe asks, before the clip abruptly ends.

Mihlali is heard screaming: “Noooo”, before she runs off set.

Lasizwe is no doubt referring to the alleged love triangle between Meeshka Joseph and her boyfriend Kayde Psiroukis aka Vato Kayde.

In May, Meeshka, who is also a social media influencer, infamously called Mihlali a “w****” and a “b****” after she accused her of stealing her rapper boyfriend.

In tweets and screenshots which were widely circulated online, the model also claimed it was the “fourth time” Mihlali had done it to her, even going as far as to tag beauty giant Revlon in the messy drama, with whom the latter is a brand ambassador.

But did Mihlali spill the tea or have to down a shot? Sadly we will have to wait until 6pm this evening when the YouTube show premieres to find out.

NOT THE ONLY STAR TO BE CAUGHT CHEATING

Mihlali is not the only celebrity to recently make headlines for cheating.

In July, model Lee-Ann Libenberg accused her husband of ten years; Nicky van der Walt of having an affair with a woman named Emily Kark.

Then there was actress Cindy Mahlangu who was named and shamed in March by beauty blogger Vicky Vee Jonas for allegedly having a fling with her boyfriend!

In both cases, the women who made the damning allegations on social media, were forced to publicly apologise after the ‘other women’ in the triangle threatened legal action against them.

And in Mihlali’s case, Meeshka alleges in a now deleted tweet, that the former apologised to her over the incident.

In a screenshot that went viral, Mihlali is believed to have messaged Meeshka: “I think your anger is misdirected.Firstly I had no idea that you’re still together. Secondly please address all issues pertaining to the relationship with your man as the grown woman you are”.