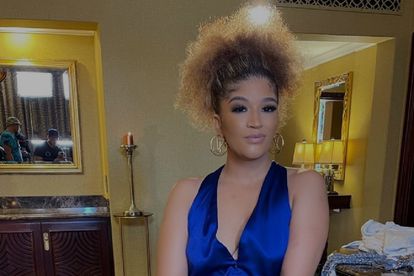 ‘Real Housewives of Durban’ star Annie Mthembu got dragged on Twitter for how her wig was installed. Image via @mrsannbition/Instagram

‘Real Housewives of Durban’ star Annie Mthembu got dragged on Twitter for how her wig was installed. Image via @mrsannbition/Instagram

Real Housewives of Durban star Annie Mthembu got dragged by the ponytail of her new wig on Twitter as tweeps made fun of how it was installed.

The Anneasthetics Beauty Studio owner thought her new hairdo was edgy and even tried to redeem herself with images of the finished product, but tweeps ripped her apart as they told her “it’s not giving.”

A video of Annie getting her hair done made its way from TikTok to Twitter on Wednesday 27 April. The hairstyle is a barbie ponytail with two strands or bangs in the front.

The clip shows a step by step process as the reality TV star’s new frontal lace wig gets installed by one of her employees at her beauty studio.

In the end, Annie is a happy client as she is all smiles and ready to show off her new hairdo.

ALSO READ: ‘Give that man his phone back’: Annie dragged over husband’s tweet

However, the finished product was not what many on Twitter expected as tweeps could not hold back the laughter and insults.

Annie, who is known as a no-holds-barred cast member of the Showmax reality show, was dragged for filth by tweeps who thought the hairstyle reflected her messy personality on RHOD. The 30-year-old has been classified as a “mean girl” by viewers of the show because of all the drama and gossip she dishes out.

Another tweep shared a video and picture of former RHOD cast member Ayanda Ncwane with the same hairstyle alongside Annie’s and said, “The Lord gives you the wig you deserve and that suits your heart.”

ANNIE TRIES TO GIVE ‘SOME PERSPECTIVE’

Amidst all the dragging, the former dancer tried to redeem herself when she posted an image of her rocking her new hairdo on Twitter.

“Just dropping this here for some perspective. Love and light,” she wrote. But her tweet was not landing.

Annie tried again with more snaps, but Twitter users were still not impressed.

“And yet in the end? Shame I look better than you on your birthday,” wrote Annie.

One tweep told her: “Not you thinking you ate but the plate is still full.”