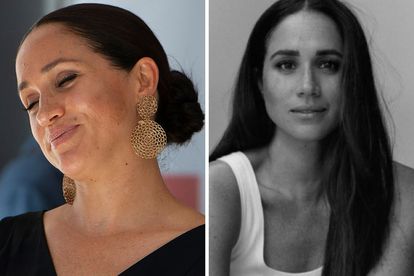 Meghan Markle – appearing in Cape Town during her family’s royal tour in 2019 (left) – has recalled how her son Archie was in a fire scare during their visit.
Images via DAVID HARRISON, AFP/Spotify

Meghan Markle – appearing in Cape Town during her family’s royal tour in 2019 (left) – has recalled how her son Archie was in a fire scare during their visit.
Images via DAVID HARRISON, AFP/Spotify

Social media users – particularly South Africans – have questioned comments made by Meghan Markle about her family’s traumatic ordeal in Cape Town during their 2019 royal tour.

This week, Prince Harry’s wife launched her first episode on Spotify podcast Archetypes and dropped some bombshells about her experience in the country.

Speaking to close friend Serena Williams, Meghan Markle recalled how her infant son Archie narrowly escaped danger after a heater in his room at their Cape Town residence allegedly caught on fire.

Megan also claimed that she was forced to continue her tour, despite being “shaken” and “in tears”.

WHERE DID MEGHAN AND PRINCE HARRY STAY IN CAPE TOWN?

Ahead of their royal tour in SA, details of Meghan, Harry, and little Archie’s living arrangements were kept top secret – for obvious security reasons.

Despite Cape Town having several world-class hotels, Meghan revealed in her podcast that the family stayed in a “housing unit”.

She said: “When we went on our tour to South Africa, we landed with Archie. Archie was what, four and a half months old. And the moment we landed, we had to drop him off at this housing unit that they had had us staying in.”

On Twitter, there has been much speculation about where the royals stayed during their tour.

According to a few tweeps, the royal family likely stayed checked into a base in a secret location before reportedly moving into the luxurious home of the British High Commissioner.

According to MailOnline, the property boasts traditional Cape Dutch architecture, with the inside having a “style of a grand English country lodge, with a 20-seater table round which the couple host lavish dinner parties”.

The sprawling nine-bedroom mansion has a thatched roof, which is widely known to be fire hazards. Fires are also commonplace during hot summers in Cape Town.

Other tweeps have shared their own theories about where the fire scare likely occurred.

DID THE MEDIA COVER THE 2019 FIRE INCIDENT?

While Meghan Markle’s comments made headlines over its shocking nature, it is seemingly the first time it has been reported.

And it seems that there are two theories at play over the alleged incident, according to tweeps: either media houses “covered up” Archie’s alleged fire scare story or it did not happen.

Following Meghan’s bombshell podcast, many tweeps shared their views on social media. And South Africans did not hold back.

Many took offence to Meghan referring to her accommodating in Cape Town as a “housing unit”.

@anniemae: “It was insulting. She makes it sound as if they were forced to stay in a substandard dump. And that the staff in the ‘housing unit’ was substandard as well.. (almost killed her baby!)  Meghan is shockingly arrogant and her self-importance makes me gag!”

And others were annoyed at Meghan’s details of her Zimbabwean nanny and the “mud cloth” she used to carry little Archie around.

@TourreBakahai: “So Meghan Markle claims that her boy could have burned to death in a ‘housing unit’ while in the care of a Zimbabwean nanny? True or not, am picking up a nasty colonial trope there, guys i.e. Leave the rich kid with the African servants and look what happens…”

@Giorgheil: “Has anyone paid attention to the nanny part? She had to remark that the nanny is from Zimbabwe for her self-serving reasons. But she makes her look like a village woman, and not like a surely highly qualified nanny”

The South African Facebook users also had their say, expressing their disbelief and anger at Megan for “fabricating lies”

Ewa Bishop: “Another revelation years after it allegedly happened to get attention and sympathy. They did not stay in a shack but a top world-class hotel. One wonders about the truth of this. If they were traumatised she certainly did not show it and seemed very happy during the visit”

Craig K. Whitehead: “Half of Cape Town burns down, people lose homes and everything they own. She’s visiting, her son is safe and she has to go to work. Ask those who lost everything if they had to go to work, not shake hands/ smile, but actually work. I can’t imagine how they must feel, poor dear!”

Debbie Rudolph: “Why is this the first we hear of it?”