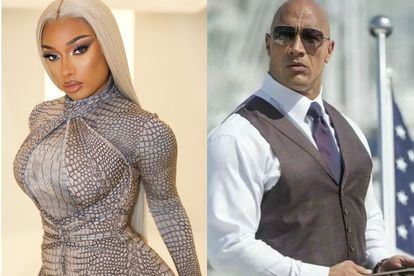 Megan Thee Stallion said it was ‘kinda epic’ that Dwayne ‘The Rock’ Johnson wants to be her pet. Image via Twitter @WWENewsUpdates2 @theestallion

Megan Thee Stallion said it was ‘kinda epic’ that Dwayne ‘The Rock’ Johnson wants to be her pet. Image via Twitter @WWENewsUpdates2 @theestallion

Since kicking off her music career in 2016, American rapper Megan Thee Stallion has gained thousands of fans worldwide, including award-winning actor Dwayne “The Rock” Johnson. The talented actor caught Megan’s attention after revealing that he wants to be her pet. Responding to the Hollywood A-lister’s viral video, the Savage hitmaker said the moment was “legendary” and now feels she’s “kinda famous”.

In a clip promoting their new film, DC League of Super-Pets, The Rock and Kevin Hart were speaking about all things pets when an interesting question came up… The two Hollywood stars also had the opportunity to hold the most adorable dogs while choosing a superpower for them.

When asked which celebrity he would be a pet to, The Rock did not hesitate to answer, Megan Thee Stallion.

When the interviewer asked why he chose Megan, the actor responded: “We don’t have to talk about that.”

The Instagram video was posted to Twitter by @TimboFionna on 7 August and has been viewed more than six million times.

In an interview with SiriusXM’s The Morning Mash Up on Saturday 13 August, Megan Thee Stallion shared her thoughts about The Rock’s viral video. When the radio hosts played the clip, the 27-year-old hip-hop star instantly burst into laughter.

“I’m kinda epic. I feel like, I used to watch wrestling all the time and being from Houston and watching The Rock…How famous he is, how much of a mega-star he is and he wanna be my pet, period!”

“We made it, we might be a little famous,” continued Megan.

WATCH THE ‘HER’ MUSIC VIDEO HERE