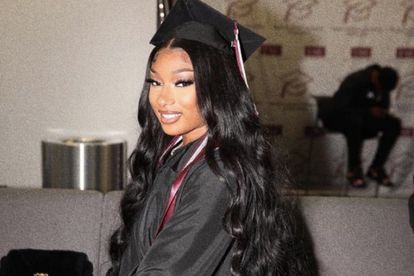 The university said: “Megan Pete, a.k.a. Megan Thee Stallion, is one of 843 graduates who will celebrate their accomplishments achieved at Texas Southern University.”

Fans were able to watch a live stream of the big day. Before graduating, Megan told her fans on social media:

The 26-year-old rapper recently shared how proud she is to have completed her course without having taken “handouts.”

“Showed my a**and still went to class. IMA ALWAYS STAND OUT WITH NO HANDOUTS doing everything they said I can’t/couldn’t!”

“Megan Thee Mf Stallion aka the mf Htown Hottie is graduating dec 11th from TEXAS SOUTHERN UNIVERSITY now go and talk abt that,” another post read.

The series of photos she shared included one of her posing in front of the Texas Southern University initials, wearing a black dress and a magenta sash, whilst holding a customised “Real Hot Girl S***” graduation cap.

She posted: “Flooding y’all today Bc I’m so happy.”

Megan has managed to successfully balance her online studies with her rap career over recent years. And the Savage star – who is one of the best-selling artists in the world – previously discussed why she was so determined to graduate in spite of her fame and success.

“I want to get my degree because I really want my mom to be proud. She saw me going to school before she passed,” she said.

Megan – whose mother died in March 2019 after battling brain cancer – was also determined to graduate for the other women in her family. She explained that her mother and her grandmother helped to make her the woman she is today.

Speaking about her ambitions, she explained: “I want my big mama to be proud. She saw me going to school before she passed.

“My grandmother that’s still alive used to be a teacher, so she’s on my butt about finishing school. I’m doing it for me, but I’m also doing it for the women in my family who made me who I am today.”