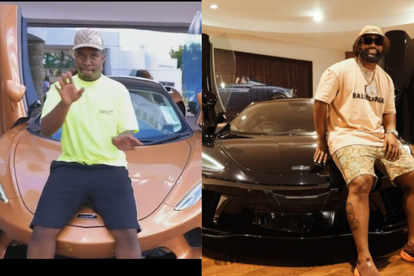 Cassper and Andile are still beefing over their McLaren’s. Images via Instagram: @andilempisane/@casspernyovest

Cassper and Andile are still beefing over their McLaren’s. Images via Instagram: @andilempisane/@casspernyovest

On Cassper Nyovest’s birthday this year, he launched his alcoholic brand Billiato and spoiled himself with a brand new McLaren. Taking to social media, he bragged about the expensive purchase while claiming he is the only one in South Africa with the car. Andile Mpisane quickly shut him down by sharing a video of himself chilling in his McLaren.

And now Cassper has headed online to throw a little more shade at Mpisane!

Earlier this month, local musician Cassper Nyovest excitedly revealed that he is the owner of the very pricey McLaren. In what was clearly a brag post, Nyovest claimed to be the only South African to have bought the car.

“Fun fact: I’m the first nigga to buy the McLaren GT in South Africa and the only one who actually owns 1. The next person to buy the car which is only gonna be on sale in February, please tag me.

We’ll be the only 2 people with the car in South Ah. #MclarenBoysWorldWide. This information was given to me by McLaren South Africa so I dare you to show me someone else. Please don’t go hiding after this tweet cause we need receipts. Don’t worry, ill wait!”

ALSO READ: A very Bonang Christmas: Mzansi’s darling lives it up in Miami

Not long thereafter, musician, soccer player, and son of businesswoman Andile Mpisane shared a clip of his McLaren while mocking Cassper for assuming he was the only one who could afford the car.

Cassper has since shared a response with the young “baller.” According to him, there’s a big difference in the car’s models and prices.

“If I explain the difference, nigg*s will say I’m hating so I’ll just let this one go. Shap Boyz. On to the next! #MclarenBoysWorldWide,” said Cassper.