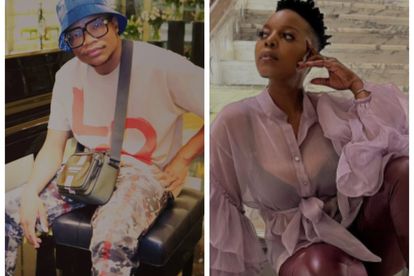 Master KG speaks on his relationship with Nomcebo. Image via @nomcebo_zikode @masterkgsa/Instagram

Master KG speaks on his relationship with Nomcebo. Image via @nomcebo_zikode @masterkgsa/Instagram

Kgaugelo Moagi, better known around the world as Master KG, has opened up about his “strained” relationship with vocalist Nomcebo Zikode.

The pair have one of the biggest songs to come out of Africa with Jerusalema, but a lot has happened since the success of the song in 2020 which has led to reports that the two musicians are not on good terms.

MASTER KG CLAIMS THERE IS NO DRAMA BETWEEN THEM

According to Master KG, there is no drama between him and Nomcebo. He told Drum Magazine that there’s “just a misunderstanding here and there.”

Following the major success of Jerusalema, which is continuing to break records and collect awards, Nomcebo alleged in 2021 that Open Mic (their record label) had not paid her for the hit song.

Things got heated when Master KG quickly took to his Twitter to denounce the claims, alleging that the vocalist had received money, but later deleted his tweets. This led to a response by Nomcebo to a fan, making it clear that the producer was not her boss and that her issue is with the record company.

Also corroborating the singer’s words, the Dali Nguwe DJ recently told Drum that the issue is between Nomcebo and Open Mic.

“The issues are with her and Open Mic, not me. We don’t have an issue, well, from my side. She said she was not paid. At the end of the day, the masters are owned by Open Mic, both her and I are just performing artists, and they need to resolve the issue with splits and stuff.”

CAN FANS EXPECT MORE COLLABORATIONS FROM THEM?

Jerusalema is not the only song Master KG and Nomcebo have released together. The two musos also worked on hit track, Xola Moya Wam together, as well as Njabulo, Bayabuza and others. According to the 26-year-old producer, he’d love to still work with the singer.

“I would definitely like to make more music with Nomcebo in the future. She has her own unique style and her own way of making things happen. I believe the success of the song was not from one side. It was me and her getting together and making it happen.”

Although this may be the case, Master KG admits that they haven’t spoken in a while but like each other’s posts on social media.

“We haven’t spoken in a long time, I see her posts and I like them. I also understand that she is busy, and we are always touring. Maybe soon, when the matter is resolved we will get together and celebrate the success of the song,” he said.

Tour Durban lures riders with the promise of renewed challenge