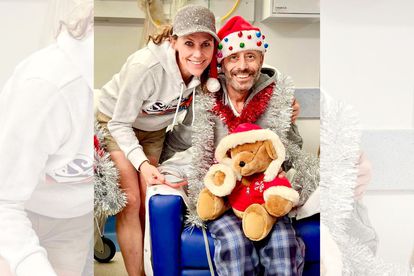 Mark Pilgrim may have had a rough year on the health front, but that hasn’t stopped him from getting into the spirit for the “happiest” time of the year – Christmas!

The radio veteran is currently in hospital amid the treatment of his stage four lung cancer diagnosis.

ALSO READ: Mark Pilgrim: Who is the woman supporting the sick radio veteran?

MARK PILGRIM GETS HOLLY AND JOLLY

In his latest social media update, Mark Pilgrim shared pics of him celebrating the Christmas cheer – complete with all things merry and bright.

Decked in tinsel and a Christmas hat, Mark sat beside his partner Adrienne Watkins as the duo smiled cheerfully for a pic.

Mark captioned the image: “Hospital Day 43: Adrienne wrapping me like a Christmas tree for a quick @hot1027fm video from the hospital.”

By the looks of it, the Hot 102.7 presenter will feature in a special advertisement for the station.

Last month, the 53-year-old – who previously helmed shows on 5FM and Highveld radio – won the award for “Best Weekend Show” in the category of commercial radio stations.

WHO IS THE WOMAN AT HIS SIDE?

Mark Pilgrim has posted many a selfie with “My Adrienne,” who he has praised for her unwavering support, both physically and emotionally.

But who is the woman that has captured the radio veteran’s heart?

Adrienne is a senior partner at a consulting firm based in Johannesburg. Mark and Adrienne recently began dating after meeting “through mutual friends”.

But before Adrienne, Mark was married for 13 years to Nicole Torres. The couple announced their divorce in 2020 and are parents to two daughters, Tayla-Jean and Alyssa.

Mark Pilgrim told You magazine of his new relationship with Adrienne: “My aim is to walk them down the aisle when they get married someday, so I’ve got to stick around”.

“I want to go on holiday with Adrienne and the girls and explore places I haven’t been to. And I want to be on the radio for a long time because this is my happy place.”