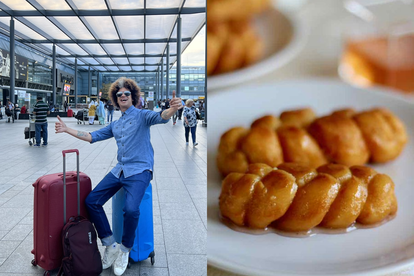 South African comedian Marc Lottering shared a heartwarming post about how a fan helped set his nerves at ease after bringing him some authentic South African koeksisters at a time when he needed it the most.

According to the post, he was just about to hit the London stage feeling all sorts of nervous when a real “tietie” came up to him with the koeksisters which tasted delightful.

What’s better than a homemade snack to help someone feel at ease when they are far away from home and feeling very nervous?

Marc Lottering knows just how helpful they can be after a kind lady brought him some koeksisters right before he hit the stage for a London performance earlier this week.

The comedian, who is currently on tour around the world, shared a sweet post about the woman who help calm his nerves by offering him the local delicacy.

“What a DAMN TERRIFIC AUDIENCE last night! Thank You to all of you who came to watch.”

“(Also, I’m sure it was the first time that the most delicious koeksisters were brought to London’s West End!)

The comedian later told IOL news that he loved the gesture especially because he was feeling so nervous.

“I was helluva nervous just prior to walking onto the stage in London because that was the first time I was performing the show outside of my own country, but when I jumped onto that stage the applause was deafening.“

“There was so much love in the theatre. It was delicious and then it was rock’n roll.”

Lottering and his husband Anwar McKay, who is also his manager, are on the tour together.