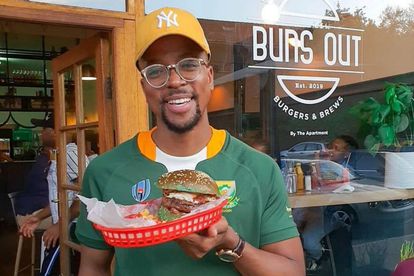 COVID-19 has been the reason for a number of restaurant closures around the country. The pandemic has made it challenging for restaurants to stay afloat. Model and restaurateur Maps Maponyane announced the closure of one of his Buns Out restaurants in Johannesburg.

Maps took to his Twitter page to sadly announce the closure of his third Buns Out branch in Rosebank. In the announcement, he mentions that they had opened the branch with the hope that they would open more restaurants around the country but the national lockdowns have made it difficult to stay open.

“Unfortunately having been put back into level 4 lockdown and the restrictions that have been placed on us with regards to the sale of alcohol has made this journey ever tougher and insurmountable. As such, we felt it necessary to focus on the survival of our Linden and Norwood branches, both whom continue to trade as normal.”

Maps is not the only public figure who has suffered a blow to their business. Orlando pirates legend Lucky Lekgwati’s restaurant, Grootman by Lucky Lekgwathi was trashed by looters on 13 July. The soccer star said he doesn’t know where to start rebuilding his business.

GROWTH OF BUNS OUT

Buns Out has grown immensely over the years with one of Maps’ mouthwatering burgers claiming a spot on Bloomberg’s 2020 ranking of the best burger spots around the world. The restaurant won burger lovers over with their quirky menu names and delicious burger choices.

Maps noted that closing down of the Rosebank branch doesn’t mean it’s the end of the road for Buns Out.

Maps and Sho Madjozi were recently in Rwanda for the Basketball Africa League. Twitter investigators got to work after spotting that the two celebs took pictures at the same tourist attractions around the scenic country. Twitter uses asked themselves if the two are on a baecation but fans haven’t heard a peep about a potential relationship from either of them.