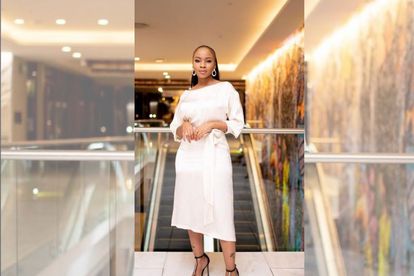 Scandal! actress Mapaseka Koetle-Nyokong, who plays the role of Dintle Nyathi, has dropped another hilarious video that left Mzansi rolling on the floor.

Koetle-Nyokong who is known for entertaining her followers with her playful videos, was joined by Skeem Saam actor Clement Maosa, who plays the role of Kwaito Seakamela-Maputla, in a live video.

The mother of one began her video by asking her fans:

“What is a skierpot [pot scraper] in English?”, adding that she wants to buy it online but doesn’t know what it is in English.

When Maosa joined her live video she asked him the same question she asked her followers and Maosa replied:

She told him to draw the six-pack and it will draw closer to him and even went on to say that she advises her clients to draw their wishes all their time and it works.

The actress previously left her fans rolling on the floor with laughter when she took part in the #BussItChallenge in January this year.

In this video, Nyokong created her version of the challenge by twerking to the floor and covering her buttocks with a Lesotho blanket.

She captioned the video:

When your man doesn’t want you to take a part of the #BussItChallenge but you do it anyway.

Dintle hasn’t told Quinton the truth because she is an opportunist who wants money from him.

She is also manipulating her child’s grandmother Layla Mackenzie (Natasha Sutherland) whom Quinton hasn’t forgiven for abandoning him when he was a baby.

Also read:‘If you see a threat, you must fight’: ‘Scandal!’s’ Gcina Nkosi on infidelity