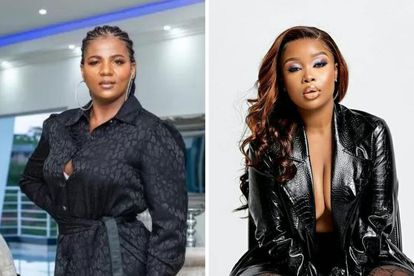 Whilst the mother of her two grandchildren is advocating for a permanent protection order against her son Andile Mpisane, Shauwn “MaMkhize” has vowed to “keep it moving”

Sithelo Shozi started a petition on Change.org earlier this week in which she called on the public to help her obtain “protection” against her baby daddy. In June, the Durban DJ accused her ex-boyfriend of “regularly beating” her –  allegedly in front of his family and friends.

But MaMkhize has previously rubbished claims of abuse by Sithelo, calling them “false and defamatory”. She has also distanced herself from social media commentary that she is using her “wealth and status” to “protect” her son.

Whilst Sithelo’s gender-based violence (GBV) petition rakes up signatures against Andile Mpisane, MaMkhize is continuing her role as Royal AM football club president

Taking to Instagram, the soccer boss posted an update of her out and about on “football duties”.

MaMkhize also seemingly hinted at Sithelo’s situation and why she refused to respond to it in her caption. She wrote: “One thing about me, I will always keep it moving”.

She added her “quote of the day”, which stated: “Don’t waste your words on people who deserve your silence. Sometimes the most powerful thing you can do is to say nothing at all”.

ALSO READ: ‘Can’t love a child and not its mom’: MaMkhize dragged over birthday post

SITHELO SHOZI: ‘NOBODY PREPARES YOU FOR BACKLASH’

Meanwhile, Sithelo Shozi has shared an update on her Change.org petition, which has accumulated over 50 000 signatures

Taking to her IG Stories, she shared: “Thank you to everyone who took time to sign the petition. It has done exceptionally well and exceeded our expectations. It will surely serve its purpose”.

Sithelo, who has the backing of GBV activists Women For Change and the ANC Women’s League, also hinted at receiving backlash from her campaign, although she has not mentioned neither MaMkhize or Andile’s name in it.

She shared: “I’ve realised how easy it is to say or encourage everyone on speaking out about thie past traumas, things they may be going through even in the present moment, but nobody really prepares you for the backlash that comes with it.

“We are truly a big part of the problem too, unfortunately. We continuously make it hard for people to tell their stories and escape these past traumas. I for one, stand in my truth and will always dim the noise around it”.