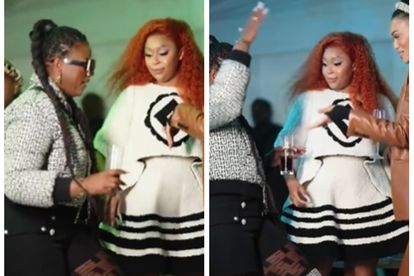 A clip between Minnie Dlamini and MaMkhize from a party over the weekend has gone viral.
Image via Instagram
@kwa_mammkhize

A clip between Minnie Dlamini and MaMkhize from a party over the weekend has gone viral.
Image via Instagram
@kwa_mammkhize

Shauwn “MaMkhize” has no shortage of celebrity pals, including some of the biggest stars in Mzansi. But according to her fans, she may have one “frenemy” in her inner circle – media personality Minnie Dlamini.

The Homeground presenter had social media users speculating over a look she gave the Royal AM boss during a night out.

Minnie, MaMkhize, and others were guests at a party at Ntosifiso Garden in Kwaggafontein, Mpumalanga on Saturday night.

Taking to Instagram, MaMkhize posted a video about her epic night out at the star-studded event. The mom of Andile and Sbahle Mpisane was invited to a party thrown by businessman Bafana Sindane.

In the clip, MaMkhize was flanked by a number of celebs including Kefilwe Mabote, Pearl Thusi, and Minnie Dlamini. Cassper Nyovest reportedly performed at the event.

She shared in the caption: “This is how I wrapped up the weekend. Bafana, thank you for inviting me to your son’s homecoming to not only witness his coming of age but to also present him with a car that you bought for him. What a special gesture.

“The genuine love and support I received was nothing short of amazing. Thank you Mpumalanga we had plenty of fun”.

MaMkhize was also joined by her son Andile who is facing allegations of domestic abuse by ex-girlfriend Sithelo Shozi. The mother and son duo were protected by heavily armed security guards at the event.

But whilst MaMkhize was seen embracing Pearl Thusi and dancing with Kefilwe Mabote, her interaction with Minnie Dlamini raised some eyebrows.

According to many followers, Minnie gave the soccer boss a “side-eye” look that left many surprised. From what they’ve previously revealed to the public, Minnie and MaMkhize have a firm friendship with the latter referring to the younger star as her “baby sis”.

But what could Minnie’s look be about, or was it simply taken out of context?

@princess_motsima: “Minnie’s look says it all”

@chicate_jnr_: “Our biggest enemies are those we eat and drink with”

@nosipho_mylady_figlan: “True the definition of enemy, she can’t even pretend”

@mokgethimash: “Is that Minnie giving you that jealous look? Haibo”

@sosibee: “I thought I was the only one noticing. Eyes don’t lie lol”

ALSO READ: ANC Women’s League backs Sithelo – what does this mean for MaMkhize?