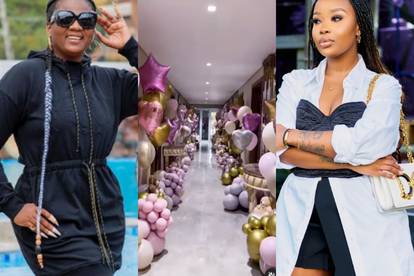 Social media users were absolutely blown away by the homecoming Shauwn Mkhize aka MaMkhize had for the newest member of her family baby Miaandy. The little one was born only a few days ago to MaMkhize’s son Andile Mpisane and his wife Tamia Mpisane.

After getting over the initial excitement over the extravagant affair, South African social media users have now started question why Sithelo Shozi – Andile’s first “baby mama” – wasn’t treated to the same extravagance when she gave birth to his first two daughters Baby Flo and Baby Coco.

On 17 May this week, Tamia Mpisane and her newborn Miaandy finally made their way home from the hospital after she gave birth on Sunday 15.

Obviously excited to welcome her third grandchild home, MaMkhize went all out with flowers and balloons and a giant banner which were all showcased in a short video which has now gone viral on social media.

While many people marvelled over the over the top extravagance, others wondered out loud why Sithelo was not treated to the same when she gave birth.

A lot of people instantly remarked that MaMkhize was rubbing Andile’s new relationship in Sithelo’s face while some commented that Sithelo was being treated to karma for allegedly breaking up another woman’s marriage.

Here are some of the things people have said about the homecoming video and how it may be affecting Sithelo:

“When Karma locates you, it breaks all protocol. What Tamia and Mamkhize gang are doing to Sithelo is nothing compared to what Sithelo did to Thandeka Sibiya.”

“Mamkhize wants to kill Sithelo. The welcome for Tamia was lit”

. I just hope baby Miaaandy won’t be the fave and that they will all be treated equally.”

ALSO READ: ‘What language is this’: Tweeps react to Andile Mpisane’s baby name