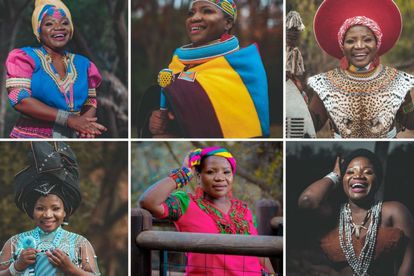 Multi-award-winning singer and dancer Makhadzi Muimbi, sent social media into a frenzy on Heritage Day when she got dressed in nine traditional outfits from all the native tribes in the country.

She posted nine pictures of herself dressed in the nine traditional outfits and blew Mzansi away by captioning each picture in its native language.

She told her fans that she decided to wear all nine outfits for Heritage Day because Africans are all one.

“Today I decided to wear all nine official language outfits for heritage day.”

“I am a Venda lady with African blood.”

“I believe that as African we are all one, and love and peace it’s life.”

The singer also trended recently when she became the only local musician to have an album reach gold status despite singing in Tshivenda language only.

The songstress told TshisaLIVE in an interview that she would like to work with Beyonce’ whom she has been messaging on Instagram for a while.

“She must put me on stage with her so we can work together.”

“I believe it will happen.”

The Limpopo singer who’s known for her energetic performances, and hit songs also told her fans recently that she won’t be doing translating her songs any time soon.

“It’s a good thing having a lot of people like to your music.”

“Most people don’t understand Venda but they’re busy dancing to my music.”

“Music is not all about the language.”

“As long as there is a nice melody and nice beat that’s the only thing that matters.”

SEE ALL THE OUTFITS HERE

Also read:Heritage Day: Why do South Africans call it a ‘braai’, rather than a BBQ?

Also read:‘Music is more than that’: Makhadzi on why she won’t translate her songs