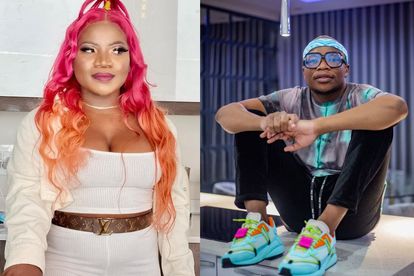 Makhadzi and Master looked ‘loved up’ in the studio recently. Images via Twitter
@MakhadziSA @MasterKGsa

Makhadzi and Master looked ‘loved up’ in the studio recently. Images via Twitter
@MakhadziSA @MasterKGsa

Limpopo-born musicians Makhadzi and Master KG were in a relationship but Makhadzi revealed earlier this year that the two decided to just be “brother and sister”. According to a new video, things might’ve changed! Fans are questioning if the two musicians are back together after they “loved up” in a recent studio session.

Makhadzi and Master KG split in 2020 whilst Jerusalema was making waves around the world. When asked by a fan what happened between her and Master KG on a Facebook live in August, Makhadzi said that they had decided to be “brother and sister”.

She also revealed that she had a new boyfriend saying he was “jealous” but did not reveal who he was.

It is reported that Master KG said the two were still young and both needed to focus more on their careers.

SOULFUL RELATIONSHIP ON THE CARDS?

Makhadzi and Master KG got cozy whilst in the studio during a Facebook live session on Thursday 11 November. The two jammed along to an unreleased collaboration and the 25-year-old musician confidently put her hands on Master KG’s chest. The Ghanama hitmaker even twerked on Master KG!

The two also held hands during the live video and could not keep their hands off of each other while enjoying the music.

After seeing the live video, Twitter was ecstatic about the potential of the two musicians being back together.

One tweep wrote: “These two mara, Makhadzi and Master KG. Makahdzdi is blushing like nobody’s business.”

Another tweep wrote: “Makhadzi and Master KG are back together? The album is going to be fire.”