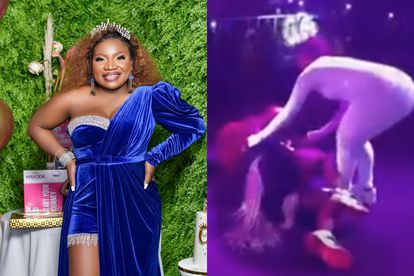 During a performance of her hit track ‘Ghanama’, Makhadzi fell and hit her head. Image via Facebook: Makhadzi

During a performance of her hit track ‘Ghanama’, Makhadzi fell and hit her head. Image via Facebook: Makhadzi

Award-winning singer and dancer Makhadzi cancelled her gigs on Saturday 2 July after injuring herself at a performance in Swaziland. The Ghanama hitmaker bumped her head on a speaker and but she has since recovered from the incident.

ALSO READ: Limpopo to the world: Makhadzi prepares for gigs in Canada and UK

After celebrating her 26th birthday in style and bagging two DStv Mzansi Choice Awards, Makhadzi headed to Swaziland for an energetic performance but sadly, it did not end on a high note.

While performing her hit track Ghanama, the 25-year-old usually falls to the ground as part of her dance routine but during this particular performance, she fell and hit her head. The crowd gasped and one of her dancers rushed to see if she was okay.

“I, unfortunately, had to cancel all my shows for the day to rest my head.”

Speaking to DailySun, Makhadzi’s record label, Open Mic Productions, said the singer did not realise there was not enough space behind her to throw herself to the floor as part of her performance.

“She was medically examined and she’s now fine. She is back at work,” said Nkateko Maluleke.

Fans wished Makhadzi a speedy recovery after the incident and although she has not posted on social media since her record label assures fans that she is doing well.

ALSO READ: Who did it first? Makhadzi accused of ‘stealing’ Malawian muso’s ‘MaGear’

Makhadzi walked away with two wins at the DStv Mzansi Viewers Choice Awards on Saturday 25 June at the SunBet Arena in Pretoria. The singer won Favourite Song for Ghanama featuring Prince Benza and Favourite Artist/Group.

Taking to Facebook on 26 June, the 26-year-old thanked her fans for their votes.

“I am speechless about this big achievement. All I see every day is love. Thank you for loving me,” wrote Makhadzi.