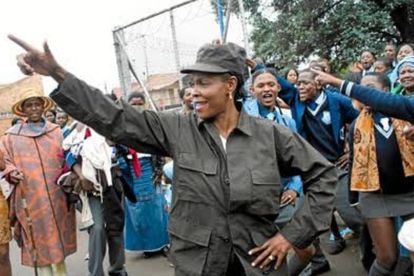 Jub Jub’s mother, Jacqueline Maarohanye, who is popularly known as Mama Jackie, is currently trending for her previous charges of kidnapping and assaulting her former Ithuteng Trust pupils.

IOL reported that she was convicted along with Generations: The Legacy actor, Ronnie Nyakale, who plays the role of Cosmo Diale on the SABC 1 soapie in February 2008.

AMANDA DU PONT: ‘I WAS AFRAID OF JUB JUB’S MOTHER’

Jub Jub’s mother, Mama Jackie, started trending after actress, Amanda Du Pont, revealed a few hours ago that she couldn’t report the rape case to the police at first because she was afraid of Mama Jackie.

“I’m afraid of the power your mother had.”

Du Pont’s statement led to tweeps digging on Mama Jackie’s past to find out who she is and why Du Pont was afraid of her.

The Los Angeles Times reported in December 2008 that Mama Jackie ran a school (The Ithuteng Trust) that ‘rescued’ orphans of political violence, and sexual abuse and gave them hope and education.

Carte Blanche exposed Jackey Maarohanye’s school by revealing that the students were not orphans and that Mrs Maarohanye scripted and rehearsed the student’s horror stories about how they had watched their parents die.

The learners told the United States publication that they were instructed to recount their fake stories at the United Nations and for former President Clinton in 2001, on U.S (United States) television and radio.

The school also attracted award-winning actors such as Brad Pitt, Chris Tucker, and many more.

The article adds that Mama Jackie also ran an adult literacy program and once approached Nelson Mandela in 1999 for help in setting up an outreach program for the children.

“Mama Jackie really created this monster. Jubjub has never been an accountable person, his mother has always cleaned up his mess.”

“Mama Jackie – the only woman to scam Oprah.”

“Reason why Jub Jub is this messed up, he’s always had his ass covered they should start accounting now.”