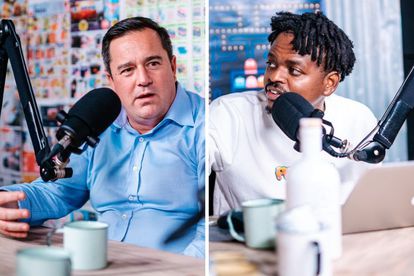 MacG confronted DA leader John Steenhuisen on racism in Cape Town and in the political party in an episode of Podcast and Chill.
Image via Twitter
@podcastwithmacg

MacG confronted DA leader John Steenhuisen on racism in Cape Town and in the political party in an episode of Podcast and Chill.
Image via Twitter
@podcastwithmacg

John Steenhuisen was put on the spot by Podcast and Chill hosts MacG and Sol Phenduka when they called him out on the city of Cape Town’s reported racism.

The leader of the DA made an appearance on the popular YouTube show on Thursday 18 August.

Appearing on Podcast and Chill, John Steenhuisen spoke about a variety of topics including Eskom and loadshedding, corruption, and incompetency in the government.

He also answered questions by MacG and Sol about his own party and former leaders Mmusi Maimane and Helen Zille.

The trio also chatted about Cape Town and the Western Cape’s impression of being home to “racist” white people.

“You got to tell your people to chill. The racism there went to private school. It’s bad!”, MacG told John Steenhuisen. Sol Phenduka also recounted how he was racially provoked during a walk on the Sea Point promenade by a white man.

Responding to the comments, John jokingly responded to MacG: “You should see how they treat people from Durban”, before adding: “I’ll give you my number, so when this happens call me, and I’ll help you out”.

On a serious note, the DA leader stated that he did not support racists in his party or personal life. He said: “I’ve had people around my dining room table before and somebody used an inappropriate word and [I told them] ‘Please you need to leave’”.

John then advised South Africans to “call out” racists on their behaviour. He continued: “We’ve still got this problem in South Africa. We’ve got people who still think that their race makes them superior. And that it entitles them to some sort of special treatment

“We’ve got to break that down and confront it wherever we see it. When we see people saying and doing racist things, we must confront them. It’s not good enough to turn a blind eye. It must not be tolerated and we must all speak out against it”.

Following his comments and “interrogation” by MacG, John Steenhuisen soon became a trending topic on Twitter.

Here’s what tweeps had to say about John’s response to racism in South Africa:

@Tsuli007: “John Steenhuisen was very casual when told about racism in Cape Town as if MacG was making that up”

@GcugcwaM: “Look at him acting surprised”

@Wandilemsomix: “Great Interview. However, MacG was a bit soft on you, especially on issues of racism. MacG should have asked you about those racist and provocative Phoenix posters”

@Ta_Fitty: “John spoke very well against racism on the podcast but his party moves differently”