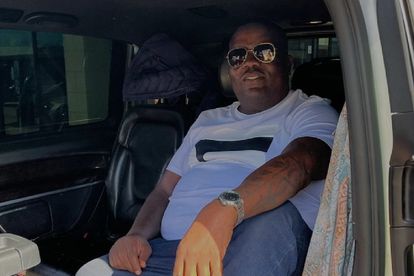 L’vovo is learning to walk again after injuring his leg in a car accident in KZN last month. Image via @lvovosa/Instagram

L’vovo is learning to walk again after injuring his leg in a car accident in KZN last month. Image via @lvovosa/Instagram

South African musician Thokozani Ndlovu, popularly known as L’vovo Derrango, is out of the intensive care unit (ICU) following a head-on collision with a truck in Newcastle, KwaZulu-Natal, last month.

L’VOVO IS RECOVERING IN HOSPITAL

According to Isolezwe, L’vovo is still in hospital as he is now attending physiotherapy to learn to walk again. But the star said that he hopes he will be discharged soon.

“The problem is that I injured my hip, so walking has been very challenging. But doctors have inserted a pediatric hip plate to help this area to heal, what is left now is for me to walk again.”

“I have started attending classes that will help me to walk and I was removed from the ICU on Wednesday,” L’vovo told the publication.

MUSICIAN IS GRATEFUL TO BE ALIVE

According to IOL, the accident happened while L’vovo was driving his silver VW Polo from his home in Newcastle.

The Kwaito star reassured his fans that the situation was not so bad, as it was only his leg that got seriously injured on my leg.

In addition, he thanked them for supporting him, as well as his family, God and his ancestors.

“When I look at the pictures of my car, I just shudder. I don’t know how I got out alive. I woke up in the hospital with the equipment connected. I thank God and my family for giving me another chance at life.

“Surviving this accident has shown me that I still have a purpose to live and do something in this life,” L’vobo added.

Unfortunately, this is not the first time the musician has suffered the same fate. In December 2020, L’vovo narrowly escaped death after he was involved in a major car accident, Sunday World reported.

The accident allegedly happened on the N2 Highway near Scottburgh, in KwaZulu-Natal.

In 2007 the musician was involved in an accident in Johannesburg that took the lives of two people. SowetanLIVE reported at the time that L’vovo had suffered a broken arm and had several stitches on his nose.