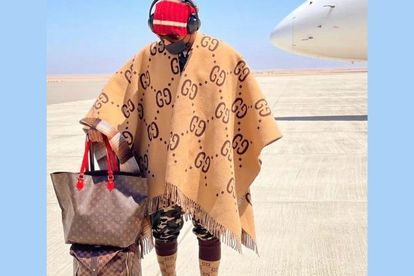 In our third instalment of “Is this what unemployment looks like?”, media personality Somizi Mhlongo visits the southern African country of Namibia on Saturday 2 October.

Somizi Mhlongo had to take “some time off” from his judge role on Idols SA and radio gig on Metro FM following the abuse allegations made against him by his estranged husband, Mohale Motaung. The broadcasters of both, his show on Metro FM and Idols SA announced the media personality’s “time off” without a date of return.

Fans missed the media personality on both shows and anxiously awaited his return. However, Somizi confirmed his unemployment via his friend and television presenter Lerato Kganyago’s Instagram story on Wednesday 8 September.

“This is what unemployment looks like,” said the media personality in a video which shows him out on a shopping spree.

Is this what unemployment looks like? Well not for the average South African. However, Somizi is one of the richest South African celebrities. He has since been seen out on shopping sprees and soaking up the sun on a yacht in Cape Town, with his tennis partner.

INSIDE THE NAMIBIAN GETAWAY

Now, the former Idols SA judge is taking his designer clothes to the desert. According to his Instagram, he touched down in Namibia on Saturday, 2 October.

Somizi posted snaps dressed head-to-toe in designer wear. He wore a Gucci throw over, paired with his signature Gucci long socks and a Louis Vuitton bag. Judging from the caption of the post, Somizi was in the country for an appearance at Steak House Pub & Restaurant in Walvis Bay.

“Touch down on the LAND OF THE BRAVE. Me and NAMIBIA have something in common….BRAVERY..,” the post was captioned.

Fans easily recognised that the media personality had been wearing R300 000 on his body.

SOMGAGA TAKES ON THE DESERT!

In other photos posted to Instagram, the former radio host is seen enjoying the desert in elaborate outfits and riding a camel.