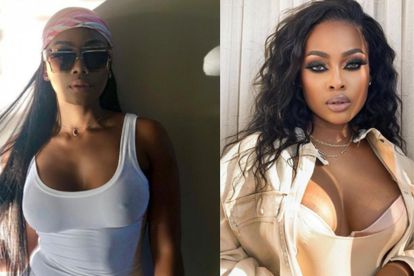 Mzansi celebrities are willing to fork out thousands of rands for breast implants as it’s slowly becoming a norm in South Africa.

While some celebrities mentioned on this list have not shied away from admitting that they have doctored their boobs, others have not admitted to doing the procedure.

According to the skinsurgeon.co.za, the cost of surgery includes the hospital, anaesthetist, assistant and surgeon’s fees as well as the prosthesis and surgical brassiere.

Breast augmentation costs starts from R50 200 currently, depending on your type of prosthesis required.

The Queen actress who gave birth last year (2020) has opened up about her breast augmentation procedure on her social media.

Gela said she’s been wanting to have her boobs done for a long time because she so was flat-chested and just kept procrastinating.

She admitted to eventually having her boobs done before she became a mother last year.

“I don’t like big boobs, even now I just did a c-cup I didn’t want to have big boobs but it’s something I’ve always wanted to do.”

“I just kept procrastinating and I said I was going to do it after having kids, but the kid’s aren’t coming so…”

Media personality and model Rossette Ncwana revealed that she had undergone a lift augmentation on her breasts and liposuction for her ‘snatched’ waist.

Ncwane came clean about her boob job on her Instagram account and stated that her breasts changed after she had her daughters Gabrielle and Talitha.

“I’ve always had big boobs but after baby Tali they looked like raindrops I blame Gabrielle, she breastfed for 3years.”

“I struggled to do lingerie /swimsuit shoots, so I went under the knife for a lift augmentation.”

“Baby belly was hard to get rid of, regardless of diet and gym time I put in. So I had liposuction done. F* that sh* is painful!”

“Dr Gruter in Cape Town. you’re welcome! Ps. I shared this because I want ya’ll to look snatched too.”

Media personality Bonang Matheba is the only celebrity on this that has never admitted to having her boobs done.

Fans of the TV host noticed that her boobs looked bigger than they did three years when they compared her old images to the current.

Though the BNG creator never admitted to having any breast augmentation procedure done, her pictures speak thousands of words

Also read:Bonang and Nomzamo go all out at Global Citizen event in NYC [photos]