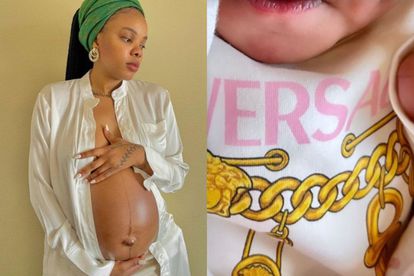 Londie London announced that she was pregnant on the reunion of the Real Housewives of Durban (RHOD) which aired on Showmax on 6 May. This is Londie’s second child. She already has a son named Uminathi Nkosi with businessman Hlubi Nkosi. Umi was born in February 2021.

The reality star has now announced that she welcomed her second child – a baby girl to the world – via an Instagram Story on Tuesday 26 July. Take a look…

“Princess B is here,” she wrote.

She previously expressed that her belly was heavier this time around – in an interview with Batswadi Magazine.

“I don’t think any pregnancy is easy. My first and this one have both had their challenges and different ones at that. Overall both were smooth in terms of health but I do however feel with this one that my belly is heavier,” she said in an interview with Batswadi Magazine.

THE ‘RHOD’ STAR WAS HOPING FOR A GIRL

Londie also previously revealed that she was hoping for a baby girl. She said she is more excited and energetic this time around and each pregnancy is a different personality.

“I’m hoping for a girl though. I’m more free with this pregnancy, I feel a new personality of yourself is revealed with each pregnancy. I’m more excited and energetic this time around. With my first pregnancy, I was lazy and didn’t do much,” she said.

“I’m eating a whole lot too with this one. Whatever baby wants, baby gets. I’ll see after I give birth on how hard I’ll have to work at the gym,” she continued.