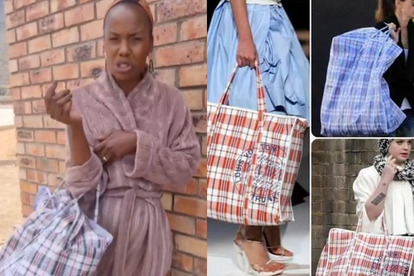 Years ago, Louis Vuitton debuted its jumbo bag that is strikingly similar to the bag that African women often use to go shopping with. The bag caused quite a stir in South Africa as locals instantly realised that it was very similar to the bag we have come to know and love. And now SA actress Mona Monyane has come out to poke fun at the giant bag.

Fashion is forever evolving and sometimes the things that get showcased on the runaway are bizarre as ever.

One such designer item that South Africans seemingly can’t get over is a giant Louis Vuitton bag that looks shockingly similar to the jumbo checkered print shopping bags that our grannies often used when they went shopping.

Local actress Mona Monyane is one of the people who can’t believe that some people are actually carrying the large bag around in the name of fashion.

Taking to Instagram, she shared a clip of herself poking some fun at the pricey Louis Vuitton bag while wearing a gown and the large shopping bag on her arm.

“Because LV really did that ????????????????‍♀️Yhu… this planet and its people…#PrivelegeMustBeRevised#SarcasmIsAnArt,” she captioned her hilarious post.

Her comment section was soon full of comments from her family and friends who laughed out loud at how she was making fun of the big and expensive bag. Many of them once again remarked how closed the bag resembled our grannies’ shopping bags.

“It’s the “halala Louis for me”

“we spoke about this before”

“Yes tshomi????????i have with pink stripes,it is another vintage as well, beautiful.”

ALSO READ: AKA asks about a Louis Vuitton collar for his puppy…and Twitter barks back