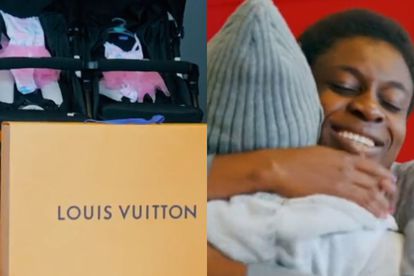 Somizi Mhlongo surprises the ‘C.O.O’ of his home. Images via Twitter @showmaxonline.

Somizi Mhlongo surprises the ‘C.O.O’ of his home. Images via Twitter @showmaxonline.

Twitter users are in awe after media personality Somizi Mhlongo surprised his helper with gifts that included Louis Vuitton on the latest episode of his reality show which aired on Showmax on Wednesday 15 June.

SOMIZI SURPRISES THE ‘C.O.O’ OF HIS HOME

Somizi Mhlongo surprised his helper, who he describes as the “C.O.O” of his  home Caroline, with some gifts as she is expecting a baby. The gifts included Louis Vuitton and a stroller.

Caroline is expecting twins who she intends on naming Kamohelo and Amo.

“I’ll never get a boss like this,” she said.

Twitter users thought it was such a sweet gesture for the media personality to surprise his helper. Take a look…

“Not a lot of people do what Somizi is doing for her helper???????????? I love how Somizi doesn’t treat Caroline like her helper but like she is family,” tweeted @TheoNkhata.

“Also how sweet were those gifts for (his) helper,” tweeted @AmoRamela.

“It’s @somizi surprising his helper for me???? yoh the level of humanity man,” tweeted @Mrs_Cayenne.

“I love how Somizi doesn’t treat Caroline like her helper but like she is family. Not a lot of people do that,” tweeted @LuckyMahloane.