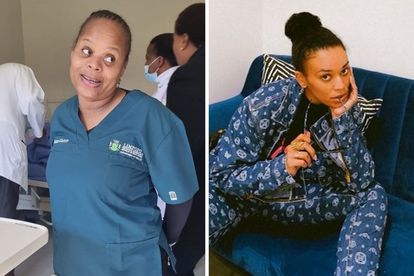 Pearl Thusi is never one to shy away from discussing hard-hitting topics – and the latest headlines surrounding Limpopo health MEC Dr Phophi Ramathuba is one of them.

The government official made headlines this week after an interaction with a Zimbabwean patient went viral – with many accusing the qualified medical doctor of being “xenophobic”.

In the clip, Dr. Phophi confronts an immigrant in a Bela Bela hospital about paying for her treatment before being discharged.

The MEC also admonished the patient and other Zimbabweans for seeking healthcare in South Africa, of which she claimed was placing a “huge strain” on the provincial healthcare system.

In a thread, the star claimed that Zimbabwean patient should not have been at the receiving end of the Limpopo Health MEC’s rant.

Instead, she placed the blame on SA’s “mismanagement of funds” and their inability to “confront the Zim government”.

“Being let down by your own government only to find yourself illegally entering other countries says so much about the Zimbabwean government. Zim people deserve better & unfortunately the SA government is already doing its own looting while overwhelmed by the needs of its own people”

“SA people are already suffering & should be prioritized. It’s a shame that a defenseless woman has to receive the speech our government should give to the Zim government directly. But the very people suffering are now the scapegoat being used to express frustrations with something beyond their control”

“Coward actions are attacking the weak instead of confronting the RESPONSIBLE”

“Why is the SA government afraid of this confrontation? Why are they attacking desperate citizens? No one would leave their own country to get their needs met if their own govt prioritized them”

‘ATTACKING IMMIGRANTS WILL CHANGE NOTHING’

After receiving backlash from several tweeps Pearl added of the Dr Phophi debate:

“SA government is also mismanaging funds while being overwhelmed by the needs of South Africans. However, attacking immigrants will change nothing-  it’s odd to confront helpless people instead of the Zim government”

“I’m not going to pretend to save, for eg. my kids’ lives- I would do whatever it takes. Personally can’t blame anyone fighting for a chance to survive. Hence I believe the Zim government needs to be confronted- and our own government also for not taking steps to solve this issue with them”

AKA ALSO HAS HIS SAY

Meanwhile, rapper AKA also reacted to the DR Phophi debate playing out on the Twitter timeline.

In his tweet, AKA referenced his own experience of being labelled “xenophobic” over his clash with fellow rapper and former friend Burna Boy in 2019.

He posted: “And to think … I was labelled Xenophobic for being upset that Bafana Bafana lost to the Super Eagles. Ha!”.