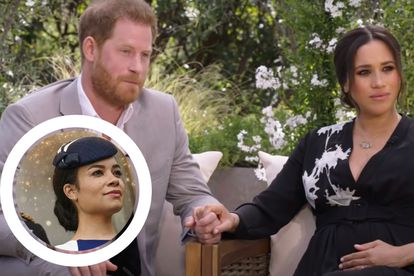 Lifetime’s new Prince Harry and Meghan Markle film, Escaping the Palace, has been met with outrage for including a dream sequence in which the Duchess of Sussex dies in a car accident.

Lifetime previously released films about the royal couple in 2018 (Harry & Meghan: A Royal Romance) and 2019 (Harry & Meghan: Becoming Royal). Now the latest film, which will make its debut on the US channel on 6 September, seemingly teases that “not all fairytales have the perfect ending.”

Escaping the Palace is the third Lifetime film retelling the story of the former royals, this time focusing on their highly publicized exit from the British royal family, dubbed “Megxit” back in 2020. Like most of its movies, Lifetime’s iteration of the story is full of drama.

According to The Independent, in a series of new images released on Friday (3 September), Meghan (Sydney Morton) is shown in a car crash similar to the one that killed Princess Diana in 1997.

She is seen surrounded by photographers while lying under an overturned car as Harry (Jordan Dean) tries to open the door. The scene plays out in the film as part of a dream sequence, with Meghan then waking up next to Harry and their son Archie.

Fox presenter Elizabeth MacDonald took to Twitter to ask who thought this was actually a good idea.

Others branded the scene as “distasteful” and “sick”.

“That is sickening and very disrespectful to Diana and her kids and the public who loved her and her children.”

Others lashed out at Lifetime and its biopics – which included a take on William and Kate and Britney Spears in the past.

“Lifetime is so disgusting for them biopics…Escaping the Palace has Meghan dying the same way as Princess Diana for what? Who thought this appropriate?”

“I find it incredible the depths of depravity people will go to these days,” another tweet read. “How utterly distasteful. How would the producers like a movie about their partner dying in a car crash?”

Others said that it is symbolic.

“It is symbolic. If they stayed, she would have ended up dead one way or the other. She was so vilified publicly, that at the hand of the tabloids, she became the enemy of the people.”

WHAT HAPPENED INSIDE THE PALACE

Upon its release, Lifetime said that the third film will recount “what really happened inside the palace that drove Harry and Meghan to leave everything behind in order to make a future for themselves and their son Archie.”

Lifetime also promised that it will “detail Meghan’s growing isolation and sadness, their disappointment that ‘The Firm’ was not defending them against the press’s attacks and Harry’s fear that history would repeat itself and he would not be able to protect his wife and son from the same forces that caused his mother’s untimely death.”

The movie is also set to delve into the private feud between Harry and his brother Prince William and their father Prince Charles, as well the conflict between Meghan and Kate Middleton. The couple spoke about these issues in real-life in an interview with Oprah Winfrey earlier this year.