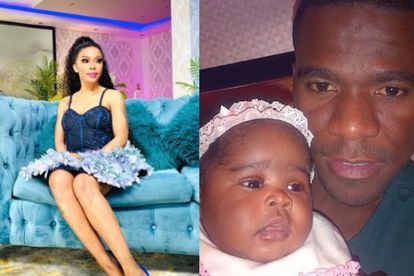 South African singer Kelly Khumalo opened up about how much her daughter Thingo needs her late dad – former Bafana Bafana captain Senzo Meyiwa as she is growing up – on the first episode of the third season of her reality show which aired on Showmax on Tuesday 5 July.

Kelly Khumalo opened up about how much her daughter Thingo needs her late father Senzo Meyiwa. Kelly and Senzo welcomed Thingo in 2014 – just a few months before her father was killed. This was while Senzo was married to Mandisa Mkhize.

Senzo is believed to have been killed in a botched robbery at Kelly’s mom Ntombi’s house in Vosloorus on 26 October 2014. Kelly, her mom Ntombi, sister Zandi, Zandi’s then-boyfriend Longwe Twala and two of Senzo’s friends were present at the house that night. The trial of Senzo’s murder is still ongoing.

The Empini hitmaker explained that Thingo really needs her father and said that he was a great father.

“Senzo, I mean really… she needs you. I’m saying this because I experienced Senzo as a father. What an amazing dad. He would have those moments where he would say, okay if you are not going to talk to me, I’m going to talk to Ma, but if anything I’m going to be present in my daughter’s life,”  she said.

It seems Kelly is not the biggest fan of Senzo’s family. She called out his mother Nombifuthi Meyiwa for “going to a witch doctor” to “get rid of her.”

“What caught my eye, more than anything else is Senzo’s mother saying, she went to the witch doctor to get rid of me,” she said.

“Me, I’m a child of the Gods, if you try me it will come back to you,” she continued.

She went on to say that Nombifuthi was projecting onto her because Senzo’s father had cheated on her.

“She wanted to remove me out of Senzo’s life. She was projecting because her husband cheated on her. So, she decided to take it up on herself to go and fight these battles,” she added.