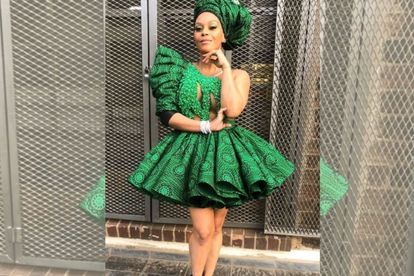 Singer and actress, Letoya Makhene who plays the role of Tshidi Moroka on SABC 1’s soapie, Generations: The Legacy has shared the late Brenda Fassie’s last thoughts 16 years after her passing.

The singer revealed on her Instagram account yesterday (22 October) that Fassie told her father,  Dr Blondie Makhene that no one would take her place as a superstar except for her (Letoya).

“MaBrrrr aka Brenda Fassie told my dad @dr_blondiemakhene that she doesn’t have long on this earth.”

“But that no one would take her place as the superstar that she was in this country but Toya (me).”

Makhene states on the video that she and her Brenda recorded the song when she was about 17-years-old, just a few months before the late Brenda Fassie’s death.

The Generations: The Legacy actress says she Fassie’s biggest fan from a noticeably early age and it was her greatest dream to sing with her.

She also states on the video that she looked up to the late singer outside her father, Dr Blondie Makhene.

“This song is on her last album #GimmeSomeVolume and this is the last song that my dad produced for her.”

Letoya said many people do not know the song but only a small group of people who really knows her know the song.