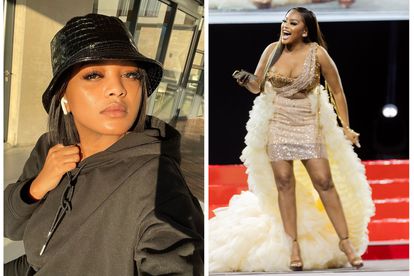 Lerato Kganyago has clapped back at speculation she is pregnant.
Image via Instagram
@leratokganyago

Lerato Kganyago has clapped back at speculation she is pregnant.
Image via Instagram
@leratokganyago

Not for the first time, Lerato Kganyago has had to shut down speculation she is pregnant.

The media personality clapped back at bodyshamers after posting a picture of herself on Instagram.

Following a stint of hosting duties at a corporate event at Sun City this week, Lerato Kganyago posted several behind-the-scenes clips on her Instagram account.

In one, the Metro FM presenter showed off a beautiful bedazzled gown down. But instead of complimenting the star on her appearance, many fans commented on Lerato’s appearance.

In fact, the comment section was inundated with talk that the media personality was expecting.

But Lerato Kganyago quickly poured cold water on the comments, clapping back: “IF I WAS PREGNANT I WOULD SAY! I’VE SAID THIS BEFORE”

When one follower asked her if she was “cooking something”, Lerato responded: “Yes, weight gain”.

HEALTH WOES OVER THE YEARS

Lerato Kganyago has had a tough few years facing a number of health challenges, including fibroids and fertility issues.

Lerato added that she was hopeful her body would carry her baby to full term.

She continued: “I think I was three-four months pregnant but unfortunately I lost my baba, life goes on. This is something that I didn’t want to discuss but since we’re having [an] honesty night. I was looking forward to this pregnancy, I thought this time around that I had made it through because I had been trying so hard for a while.”