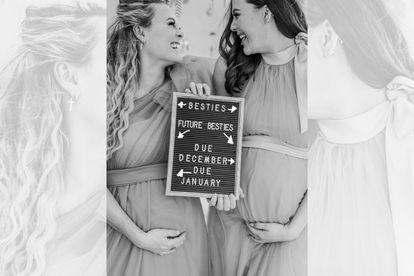 Legacy actresses Jay Anstey and Reandi Grey share a special bond on and offscreen. And now their unborn babies are expected to follow in their footsteps…

The stars of the hit Mnet series are both pregnant with little girls, due imminently.

Jay and Reandi, who play sisters Lexi and Elizabeth respectively showed off their baby bumps in a joint beautiful maternity shoot.

Jay and Reandi both posted black and white pictures of their maternity shoot on their social media accounts. And they look absolutely stunning!

In the pics, the women wear flowing maxi dresses that show off their bumps In their hands, the co-stars hold a board that reveals the message: “Besties and future besties”.

Jay’s baby is due next month, whilst Reandi – who has a two-year-old daughter – is expecting her second child in January 2022.

Jay posted on Twitter: “I swear we didn’t plan this”.

Reandi shared the snap on Instagram with the caption: “@jayanstey I cannot wait for you to be stuck with me for the rest of your life! And, just to make sure, I added another generation!

It’s not yet clear if Jay and Reandi’s pregnancies will be written into the Legacy storyline. However, there are a few twists and turns expected to play out.

The series will feature new faces during the course of season two. Media personality and actress Lalla Hirayama has officially joined the cast and will be making her appearance this month.