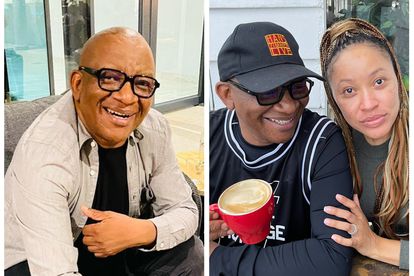 Lebo M – who recently married businesswoman Pretty Samuels – has accused an ex of starting a ‘smear campaign’ against him.
Image via Twitter
@therealLEBO_M

Lebo M – who recently married businesswoman Pretty Samuels – has accused an ex of starting a ‘smear campaign’ against him.
Image via Twitter
@therealLEBO_M

When it comes to ex-wives and girlfriends, Lebo M has a string of them…so who exactly is behind a “social media smear campaign” aimed at him?

On Tuesday morning, the Lion King composer shared screenshots of comments he had received on his Instagram account.

In it, the IG user had flooded his posts with nasty comments and shady remarks. But the music mogul stopped short of naming and shaming the woman.

Taking to Instagram, Lebo M – who recently married Pretty Samuels – revealed that an ex was behind the “smear campaign”.

The mystery woman – using the handle “@lulonke40” – made comments on a number of his IG posts, including:

“Grow up madala [old man] you will die alone”

“You’re old madala. You will embarrass your kids”

Lebo M captioned the screenshot in a since-deleted Instagram post: “Angry bitter ex has decided a social media smear campaign is wise. I have to apologise to my friends and family, along with my fans for this nonsense… all I can do is block them”.

WHICH EX IS HE REFERRING TO?

Lebo M has quite the reputation when it comes to women. In fact, the father of nine tied the knot for the eighth time to Pretty Samuels.

Last year, Lebo M split from ex-wife Angela Ngani-Casara, whom he wed thrice. The former couple said in a joint statement: “We had hoped that the third attempt would have been the final one in both our lives. “We have tried hard and we are proud of our efforts. Regrettably, we simply didn’t connect”.

Lebo M was married to his first wife Viveca Gipson for five years. After their divorce, he married Nandi Ndlovu, whom he stayed with for 11 years. He was also engaged to actress Zoe Mthiyane.

Lebo M has previously lashed out at his ex-wife Angela, accusing her of being violent and abusive. He even blamed Angela for their son Mthunzi’s violent attack on an ex-girlfriend earlier this year. The star said in a statement: “When I was married to Angela, for the initial five years, I experienced more violence in my life than any relationship or marriage prior”.

He continued: “I stayed in for as long as I could, with my motivation being the well being of all the children at that time. It was not until Angela violently attacked me while I was sleeping, in the presence of our then two-year-old minor daughter who woke up to Angela’s rage.”