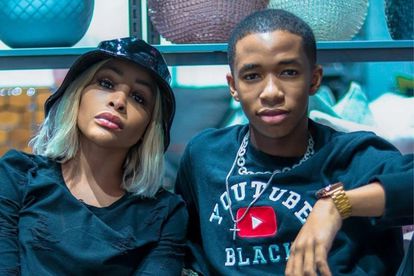 Social media personality Lasizwe Dambuza revealed why he unfollowed his half-sister Khanyi Mbau via an Instagram Live session on Friday 13 May.

LASIZWE: ‘I AM SOMETIMES PETTY’

Lasizwe Dambuza is the half-brother of actress Khanyi Mbau as they share the same father, taxi boss Menzi Mcunu. The brother and sister duo are known to be quite close as Lasizwe appeared to be the one to “shelter” Khanyi when she ran away from her boyfriend Kudzai Mushonga in Dubai.

He said that there was no beef between them.

“You guys like creating drama and said they beefing,” he continued.

ALSO READ: ‘I’ll be killing her’: Lasizwe to retire his alter ego ‘Nomatriquency’

DID LASIZWE HAVE BEEF WITH KHANYI MBAU BEFORE?

Khanyi and Lasizwe previously had beef back in 2018. This was because Lasizwe pretended that he owned a home in Sandton which he was actually renting. So, Khanyi called him out.

The social media personality admitted that he learnt his lesson and if Khanyi did not expose him, it could have been worse. This was after South African singer Nandi Madida asked him if he would have came clean about his home, if Khanyi did not call him out.

“Okay, to be honest, if Khanyi didn’t call me out, (laughs). But lesson learnt, for me. You know journalists, they investigate and it would’ve spiralled out of control and I’d look way worse. Thank you so much for calling me out,” he said.

So, will Lasizwe return for a second season of his hit show Drink or Tell the Truth? Yes. He revealed that the show will return later in the year, maybe around August or September.