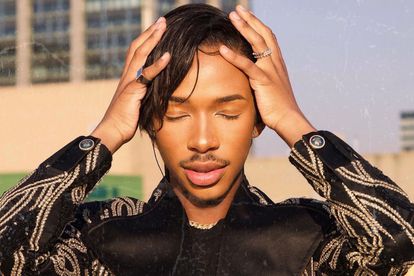 Lasizwe has described his achievement of featuring on the Forbes Africa ’30 Under 30′ list as a ‘dream come true’.
Image via Twitter
@lasizwe

Lasizwe has described his achievement of featuring on the Forbes Africa ’30 Under 30′ list as a ‘dream come true’.
Image via Twitter
@lasizwe

And according to his representatives, that included a social media hiatus

But less than 24 hours after disclosing his mental health struggles, the star was back on Twitter, posting about one of his favorite reality TV show.

On Tuesday, Lasiwe posted a video clip of himself checking into a rehabilitation centre.

He captioned the clip: “One thing about me, I am not shy to express how I feel. I have checked myself into a mental health wellness facility. I haven’t been okay for the past months”

The media personality – who opened up about his depression and anxiety last year, admitted he needed help.

“I have been so depressed. I have decided to fight this by taking a break and dealing with this 1 on 1.”

Lasizwe’s representatives the posted an update, which read; “Due to Lasizwe being off the socials – his page and posts will be managed by his team within this period because of contractual obligations that have to be adhered to.

“Kindly keep him in your prayers during this tough times”.

Lasizwe received a ton of support from his celebrity pals and social media followers. However, the star was also questioned over the legitimacy of his claims.

Hours after announcing his stay at rehab, Lasizwe tweeted commentary on one of his favourite reality TV shows; Uthando Noxolo.

The Moja Love show – hosted by Andile Gaelesiwe – shows the steps people take when asking those they’ve wronged for forgiveness.

Lasizwe’s fans were confused by the posts. Replies to his tweets read;

“Are you not in recovery?”

“Aren’t you off socials?”

“Ubuyile [Are you back] babes?”

It’s unclear if Lasizwe himself or his team posted the tweets in question.