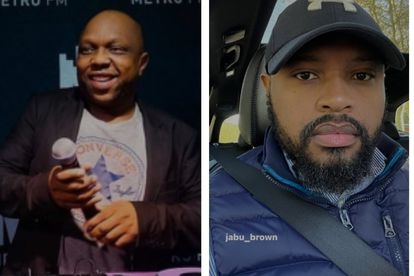 Jabu Brown, who is rumoured to be dating reality TV star and influencer Lasizwe, has spoken out following his altercation with Metro FM DJ Mpho “Mo G” Madise.

Speaking to the Daily Sun about the incident that took place on Sunday 3 July, Brown said that he had lent Mo G his BMW for two days but the radio personality was refusing to return.

A video of Brown confronting Mo G at a parking lot outside Disoufeng Pub in Soweto has been doing the rounds.

According to Brown, he and Mo G were meant to do a car segment on Let’s Talk About It With Mo G on Metro FM. Because the feature was about Brown’s BMW X3, they agreed that the radio host would test drive it on Wednesday 29 June and return it on Friday 1 July. However, when Friday came, Mo G was allegedly nowhere to be found.

After allegedly calling and texting him several times, Brown says he eventually checked the DJ’s gig guide and headed to the pub he was playing at.

“I went there with my brother and we saw the car. I walked up to Mo G at the DJ box and asked him to give me my car keys. He refused. I created a commotion and he called the security on me,” he claimed.

“Once he was done, he came out with security and actedas if we are harassing him. He called a meter taxi and left with the car keys.”

Hours later, Mo G was allegedly back and that is when the fight started.

“He went to my car and got in. I was able to block him. He screamed to some guys saying we’re trying to hijack,” Brown said.

Later, police arrived and Brown was handed his car keys. He told the outlet that he decided not to open a case and will no be working with the presenter anymore.

Watch the fight in the video below:

This is not the first time that Mo G is embroiled in controversy. An article by the Daily Sun, which was published last year, reported that he was in hot water for stealing equipment from a fellow radio DJ.

According to Deejay Siphiwe, real name Siphiwe Motha, Mo G refused to return his DJing equipment which he had borrowed from him in 2017. He added that the equipment had cost him R50 000.