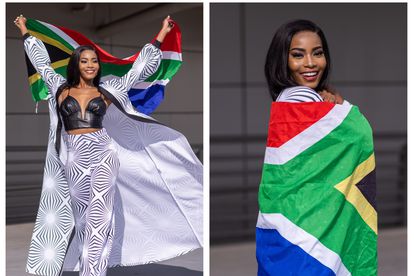 Miss SA Lalela Mswane has departed for Poland to attend the Miss Supranational pageant next month.
Image via Instagram
@official_misssa

Miss SA Lalela Mswane has departed for Poland to attend the Miss Supranational pageant next month.
Image via Instagram
@official_misssa

Lalela Mswane has officially departed for Poland where she will be representing Miss SA at the Miss Supranational pageant next month.

Chanique Rabe of Namibia will be handing over the crown at the pageant on 15 July. Contestants from 74 countries from around the world will be competing.

Lalela Mswane will be the second Miss SA to compete at Miss Supranational after Thato Mosehle placed second last year.

Taking to social media, the Miss SA pageant revealed that Lalela Mswane had departed for Poland over the weekend.

Organisers shared in one post: “Round two on the international stage. Your moment has arrived Lalela Mswane. The @misssupranational stage is waiting for you”.

In the pics shared online, Lalela wore a black and white outfit by Khosi Nkosi. As is tradition, she also proudly waved the South African flag.

She shared on her own Instagram account: “And so the journey begins. This moment is a culmination of so much hard work, the support of the Miss SA organization, my loved one’s prayers, and your love South Africa. Thank you so much for all the votes messages, comments, reposts, and shares, I see and feel the love.”

The 25-year-old graduate later updated fans that she had landed in Poland and had been welcomed by a delegation that included the Minister of Human Settlements Mmamoloko Kubayi and the ambassador of SA to Poland NJ Mngomezulu.

WHY IS LALELA MSWANE COMPETING AGAIN?

Earlier this year, news of Lalela Mswane competing at the Miss Supranational angered many South Africans. This, after she competed at the Miss Universe pageant in Israel in December 2021.

Typically, Miss SA and her runners-up each compete at one international pageant during their year of reign.

In March this year, former Miss SA Shudu Musida competed in the Miss World pageant, which was delayed twice due to a Covid outbreak.

Many Miss SA fans felt the move to permit Lalela to attend her second international pageant was “unfair” to her runners-up Moratwe Masima and Zimi Mabunzi.

Responding to the criticism, Miss SA CEO Stephanie Weil said in a statement to News24: “Covid has forced many events to be postponed, and this has caused confusion around the different competitions and when they are set to be held.

“It is also not uncommon for the same representative to attend more than one international competition during their year of reign should the international pageant’s dates and timeline allow for it.”

It’s unclear which pageants Moratwe and Zimi will compete in during their year of reign.

A new Miss SA will be crowned on 13 August 2022 when Lalela Mswane will officially hand over her crown.

The dates for Miss Universe and Miss World 2022 have yet to be announced.