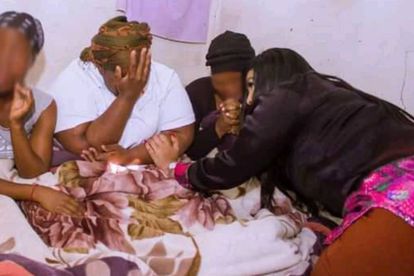 The Kwa-Zulu Natal (KZN) floods – and another wet weekend of heavy rainfall – have left families devastated and in despair, over the damage it has caused in recent days.

According to News24, this week’s severe weather conditions have tragically resulted in a death toll of 395 people who died after drowning and from collapsed and damaged infrastructure.

And celebs – especially those who hail from the province – are doing their bit to help.

Taking to Instagram, Ayanda Ncwane revealed that she had spent time revisiting her hometown of Ndwedwe which was affected by the KZN floods.

The widow of gospel singer Sfiso Ncwane visited families of victims who had died in the disaster.

Posting a series of somber pictures, Ayanda shared on Friday 15 April: “This is my hometown Ndwedwe. Yesterday I visited most of the families who are now homeless and stranded. Homes are washed away and bereaved families are mourning at the neighbor’s or relatives’ places. It’s one thing watching the news, it’s another when you hear them tell you how they had to dig up their loved ones for days. Some are still buried under heavy stones or washed away in the rivers”.

Ayanda also appealed to her followers to help those in need after the KZN floods.

She continued: “We have done our little bit to donate towards funerals and other emergencies but it’s not enough as there’s way too many people in need. I’m pleading with business owners who are rural born to check our people. It’s already difficult to bury one person, most of these people have from 2 to 10 bodies per family to bury soon. Anything you can bring forward please do!.

“Mostly they need WATER ASAP! They are currently drinking dirty water. My team and I are trying our best to deliver water but it’s not enough, more litres are needed urgently!”.

Meanwhile, a number of celebrities have rallied together to help rebuild the province after the KZN floods.

And according to Jerusalema singer Nomcebo, their efforts have already yielded almost R300 000 to help rebuild the disaster-hit province.