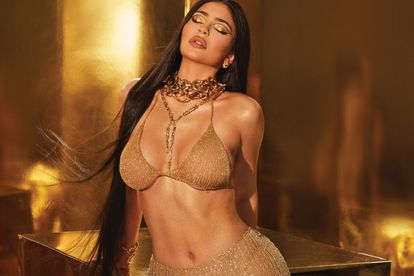 When it comes to reality TV’s biggest and most glamorous family the Kardashian/Jenner clan – there’s no such thing as a budget – or that’s what we thought. An insider recently revealed that mom to all the famous models/moguls, Kris Jenner, is becoming worried about her youngest daughter Kylie Jenner’s spending habits.

The concern follows Kylie’s Instagram post bragging about her $72 million private jet which she also recently used to make a 17-minute trip that would have been less than 40 minutes by car.

Kylie Jenner is living her best life as one of the world’s wealthiest and most influential celebrity influencers.

Her spending habits have however resulted in a lot of online backlash for social media users who blasted the 24-year-old for bragging about her and Travis Scott’s private jets on Instagram.

“You wanna take mine or yours,” she captioned a photo of herself and Travis standing outside their jets on Friday last week.

She reportedly drove for 30 minutes to the airport to take a 17-minute trip on her jet which would have only taken her 35 minutes by car, The New York Post reports.

Instant criticism ensued as social media users slammed her as “classless” and a “climate criminal”.

To make up for it, the Kylie Cosmetics founder then shared a video of herself shopping with four-year-old daughter Stormi at Target but was once again lambasted for “pretending to fit in with the peasants”.

Meanwhile, mom is worried too

Kris Jenner, the world’s best momager also reportedly told The Post that she was concerned with Kylie’s spending habits.

“Kylie has been spending so much that, after she bought the jet, her mom had to step in and tell her to slow down,” said the insider.