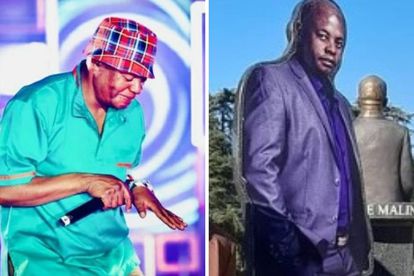 The widow of Trompies member Mjokes is appealing for donations amid news their family is about to become homeless.
Images via Instagram
@simplyeugene01

The widow of Trompies member Mjokes is appealing for donations amid news their family is about to become homeless.
Images via Instagram
@simplyeugene01

The family of the late Trompies singer Emmanuel Matsane aka “Mjokes” will be spending Christmas on the streets after falling on hard times following his death last year.

The kwaito singer – who died in a car crash in May 2021 – left behind a wife and three children.

Mjokes was also one of the directors at Kalawa Jazmee, which was founded by several musos, including DJ Oskido. The record label is home to artists such as DJ Zinhle, Speedy, and Alaska.

His widow has since appealed to the public for donations to help feed her family.

According to the Trompies singer’s widow Lamello “Lami” Mogane, she and the children she shared with Mjokes are being forced on the streets after being served with an eviction notice from her landlords.

The family has been living from hand to mouth following Mjokes’s death last year, and has missed paying rent on their home for the last seven months.

Speaking to Drum, Lami revealed that her financial woes began when Mjokes’s family allegedly claimed she was not entitled to his money. This, after the remaining members of Trompies met with Kalawa Jazmee to discuss his estate.

She told the publication: “I have endured a lot. They said I am not supposed to claim any money that belongs to him. Because of that one comment made by a member of Trompies, I have been in and out of court fighting for my husband’s estate so that I can afford to take care of my children.

“As a woman, you are either blamed for killing your husband or when your husband died in an accident – like mine did – you will be denied access to his money and be accused of not being a legitimate wife, which is what I am going through”.

Lami appealed to the public for donations to help feed her family, and possibly give them a roof over their heads.

She added: “We have been living on handouts and people have been donating some money.

“If you can mention that I need donations, please do. I used to care what people say about me, but now I don’t because I might become homeless”.

NO HELP FROM KALAWA JAZMEE?

It’s hard to believe that the successful Trompies star and record label director did not leave provisions for his family.

However, this was not the case claimed another Kalawa Jazmee director Bruce Tebogo “Dope” Sebitlo. He insisted Mjokes’s estate is wound up in an ongoing court case. He also insisted that the singer’s widow did not approach the record label for financial assistance.

Fellow directors Oskido and kwaito artist Spikiri have remained mum on the news.

Following his emotional appearance on Podcast and Chill in September, Dr Malinga was inundated with support from the public, who raised over R100 000 to help him. Fellow artist Black Coffee also helped out, donating R20 000, whilst singer Makhadzi offered him a supporting act spot on her “One Woman” show.

During his interview with MacG, Dr Malinga claimed that he was hit hard by the Covid-19 pandemic, which saw his live performances dry up.

Other artists who have appealed for cash include singers Zahara, Zola 7, Lusanda Mcinga, and actor Vusi Thanda.