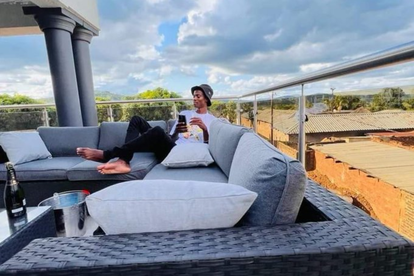 South African musician Khutso Steven Kgatle, better known by his stage name King Monada just headed online to share a photo of himself chilling in the lavish home he built for himself in his Limpopo hometown. While many praised him for his amazing achievement, others have lambasted him for setting up such a large mansion among the impoverished villagers who “have to look up at him from his throne”.

A number of people wondered why he didn’t build his home among other homes of that kind in a wealthier suburb.

King Monada, best known for his songs Ex Yaka and Chiwana, left many heads turning after he headed on social media to share photos of himself enjoying the mansion he built for himself in his Tzaneen, Limpopo village.

In the snap, Monada enjoys a glass of chilled champagne while sitting back on his outdoor furniture.

In the background of the photo, smaller and much more humble houses paint a picture of a very modest village that indicates a big difference in his income compared to the incomes of other families around him.

He captioned the snap, “Home,” while adding a blue heart emoji and a house emoji.

The post received over 15k likes and hundreds of comments from people who love the life he cultivated for himself.

Others however wondered out loud why he chose to build such a big home among people who can’t afford similar.

A number of people accused him of trying to “look down on the poor.”

“I wouldn’t love to have that kinda soft life while my neighbors are living like that, remember that’s my opinion not yours”

“Spitting in the face of the poor?”