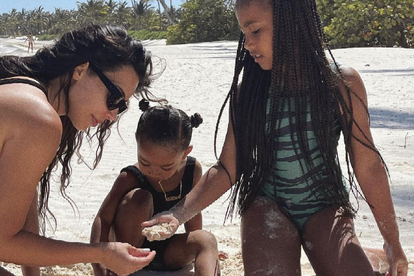 Kim Kardashian with her and Kanye West’s children. Image via Instagram @kimkardashian

Kim Kardashian with her and Kanye West’s children. Image via Instagram @kimkardashian

Kim Kardashian West broke down in tears and admitted she feels like a “failure” while opening up about her split from Kanye West.

During the latest episode of Keeping Up with the Kardashians, which was filmed last year, the 40-year-old reality star struggled to hold back the tears as she opened up about her marriage woes.

Khloe Kardashian, 36, asked Kim: “How are you and Kanye doing?”

To which she replied: “There’s no fighting, like now it’s all calm so I just toll with it now.”

Khloe then told the cameras: “Kim is dealing with so much right now. And it’s tough because right before we got here, Kim and Kanye got into this huge fight.”

Kim hinted that the reason for divorcing the ‘Heartless’ rapper after almost seven years of marriage was because he “deserves” a wife who can travel from state to state with him.

THERE IS NO MORE KIMYE

Speaking to her sisters about Kanye – with whom she has North seven, Saint, five, Chicago, three, and two-year-old Psalm – moving from California to a Wyoming ranch, she confessed: “I honestly can’t do this anymore.

“Why am I still in this, like, place where I’m stuck for years? Like, he goes and moves to a different state, every year, I have to be together so I can raise the kids, you know? And he’s an amazing dad, he’s done an amazing job.”

The Skims founder admitted she feels like a “failure” and a “loser” because it’s her third marriage.

Kim, who filed for divorce from the hip-hop star in February, was previously married to music producer Damon Thomas between 2000 and 2004, and basketball player Kris Humphries from 2011 to 2013.brands : Keeping Up with the Kardashians, Heartlesspeople : Kim Kardashian West, Kanye West, Khloe Kardashianlocations :